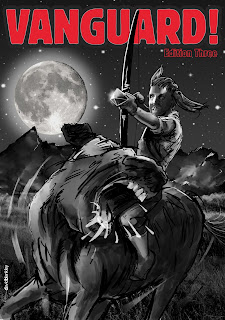 Dirk van Dom has dropped us a line to tell us that the latest issue of action adventure indie anthology Vanguard is now on sale.

"It's been a bit of a wait as myself and my fellow creators fended off various zombie-like RLI's ("Real Life Issues") that just wouldn't curl up and die," he says, " but our third edition is finally here! And it's worth the wait, if I do say so myself.

"Notable amongst these is S.N.A, which appears - and will continue to appear henceforth - as a blood-soaked full colour centre-spread strip," says Dirk.

"The one bit of bad news is that, due to circumstances beyond our control, chapter 3 of 'Halo and the Gryphon' will not appear as scheduled. But it will return, with a vengeance!

The line up is as follows (visit the blog for blood soaked visuals, note this is not your PG title):

Atomic Call (Art: David Blankley): Call Malone has been captured by bounty hunter Balthazar Quest, who's been hired by a mysterious organisation to retrieve the Atomic Transference gauntlet she stole. But Balthazar is not the only one trying to get his hands on the strange technology...

Buck Tucker: Enemy of Love (Art: Bhuna): Tucker has been brought back to (semi)life by a hellish creature he affectionately refers to as 'Slug Slut'. Slug Slut has a mission for the recently deceased serial killer - namely, ridding the human race of a contagious disease called 'love'. In order to do this, he first needs to learn about the demonic Q-Pids...

Vestige (Art: Brian Coyle): Irish-American Chet Easterbrook travels to Ireland following a series of tragic events that lead to his life being turned upside-down and inside-out. He feels certain he will find answers to his predicament here...but his predicament is about to get worse.

Harry Kane will see Her Safely Home (Art: Jim Cameron): This light-hearted adventure strip follows MMA Champ and B-movie action star Harry Kane, who - following a chance encounter with a strange old man whilst touring Tokyo with his new movie - inexplicably finds himself hundreds of years in the past, seemingly living out the plot of his film!

S.N.A (Surname Not Applicable) (Art: David Blankley):  In this full colour spin-off from Atomic Call, we learn more about Mandy S.N.A, the mysterious stranger with a split personality who's been making Call Malone's life hell. Who is she? What is her connection to Call? What does she know about the A.T gauntlet? And will anybody who gets in her way ever live to tell the tale? (Answer to that last one - probably not.)

If ordered from Dirk, the issue will ship with a free set of full colour artcards featuring some of Vanguard's characters in a Japanese themed setting. Check out previous blog posts for a look at the cards. (Of course, they look even better in the (paper) 'flesh'. :) Only a limited number have been printed, so it's a case of first come, first served with these.


• Print editions of  Vanguard Issue 3 are also available to buy from Lulu.com via: www.lulu.com/shop/van-dom/vanguard-issue-3/paperback/product-20957564.html

• You can also download a digital version of the issue from the Vanguard Comicsy store here: www.comicsy.co.uk/vandomonium/
Posted by John Freeman at 8:30 am