Madefire and deviantART To Launch "Motion Books" to Worldwide Audience 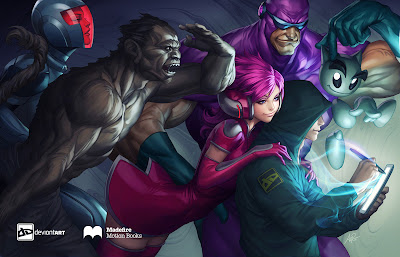 Digital comics makers Madefire and the art-focused social network deviantART have announced they have formed a strategic partnership to provide unprecedented access through deviantART’s creators and audience to the making and distribution of digital Motion Books ™ published with Madefire’s highly respected publishing platform.

The companies involved say the new partnership formed between deviantART and Madefire, will turbocharge a next generation of dynamic storytelling.

Founded in 2011 by Ben Wolstenholme, Liam Sharp (who DTT readers will recall as the artist on British comics such as 2000AD, Death's Head II and more) and Eugene Walden, Madefire provides artists and writers a publishing solution for iOS and the web, allowing creators to build their stories in a new format called Motion Books.

Madefire is backed by Toni Schneider, Partner at True Ventures and CEO of Automattic, the makers of the wildy popular blogging platform Wordpress, with angel investors including Sina Tamaddon, former Senior Vice President of Applications for Apple Inc. The Advisory Board also includes industry leaders Mike McCue, CEO and Founder of Flipboard, Dave Gibbons, co-creator of Watchmen, the bestselling graphic novel of all time, and Bill Sienkiewicz, widely recognized as one of the greatest innovators of sequential art. 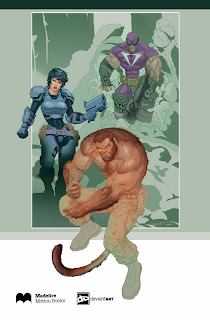 The alliance between the 5-star App Store-rated sensation Madefire and the massive creative community of deviantART brings together the toolset and delivery system to reach a global audience.

"The walls of the traditional comic book world, limiting artistic access to the tools of production and distribution, have now fallen," claimed a spokesperson.

"Madefire and deviantART have seized the power of the digital space to introduce the next generation's shared cultural mythos with stories and characters that will move across the screen of imagination with incredible sound and fury.

“DeviantART and Madefire will provide the ultimate story engine, by bringing creators and readers together,” said Ben Wolstenholme, co-founder of Madefire. “The Madefire app for iOS has had a storming response, and now we are moving to the web with deviantART and enabling a new generation of storytellers.

The deal consists of a creative partnership where the entire deviantART creator community is given unlimited access to Madefire’s revolutionary, browser-based publishing platform to create and distribute content while individually controlling the price point. Using deviantART’s Premium Content Platform, the content will reach an enormous worldwide audience while taking advantage of the Platform’s built-in payment and royalty systems fuelled by deviantART’s virtual currency. The content will also then be available on mobile through the Madefire App.

“Madefire and deviantART share in the creator-first mission of empowering artists, writers and visionaries to liberate their narratives,” said Angelo Sotira, CEO and Co-Founder of deviantART. “It just looks so fantastic, exploding cells off the ‘page’ with the pop vibrancy that the comics style had always suggested, but never achieved until now.”

As a special introduction, the first flight of Madefire books will be made available on the Web through deviantART for 10 cents a piece - the same price at which the world first thrilled to Batman and Superman in the 1930s. The books will remain free on the Madefire App for iOS devices for a limited time.

As part of the agreement, Madefire will be the very first native motion-book reader on the deviantART platform. Madefire’s previously iOS app-only experience will now be available for web reading through madefire.com and deviantart.com. Top line publishers now will be able to distribute through to deviantART’s huge community with Madefire.

Several Motion Books are now available on your desktop by some of the top creators in the world working with Madefire, like Dave Gibbons, Liam Sharp, Bill Sienkiewicz, and now you can keep an eye out for radical content by some of deviantART’s amazing community of storytellers from every corner of the art world.

DeviantART - the seventh largest social network on the web – was created to entertain, inspire, and empower the artist and art lover in all of us. Founded in August 2000, deviantART is home to over 26 million registered members worldwide and features an extensive platform used to exhibit, promote and discover works and other members within a peer community. As the largest aggregator of creative talent on the Internet fuelled by over 150,000 daily submissions and an audience reaching 76 million monthly unique visitors, deviantART is one of the world’s largest websites enabling participation in the arts at a scale never imagined in the traditional art world.
• The Motion Books are available at http://browse.deviantart.com/motionbooks

• For more information go to madefire.com