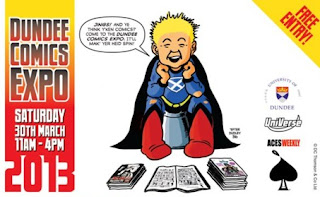 Comics writer and artist MontyNero was one of many at the Dundee Comic Expo last weekend, and, complementing Jeremy Briggs' Photo Report on the event, offers his take on the event...

For some reason I don't often take tables at cons, but Dundee Expo was an exception for three reasons. Firstly, it's free to the public and a family event which is admirable. Secondly it's barely ten minutes from my home, a distance even a lazy artist like me can handle. Thirdly, the good work of Dundee University in promoting the comics medium is something I wanted to support in my own modest way.

On arriving at my table it became clear that I was surrounded by Expo experts with banners and hoardings and plates of enticing cakes to attract a crowd. In contrast, my own self-published wares were meagre and rudimentary. A lot of guests sell comics, merchandise or do sketches for cash which is commendable. I'm frankly too unsure of myself for the latter, and there are technical issues with the former. I've got stuff in 2000AD and Clint this very month but I can't very well sell that as both Rebellion and Mark Millar get annoyed when I post them coins through the post. I'm doing a six issue series - Death Sentence, with Mike Dowling - which Titan aren't releasing until October so it's too early to sell that. I decide the best thing is to do is get on with finishing the short story I'm drawing for 2000AD and chat to anyone that stops by.

The Expo takes place over three main rooms, and my seat near the door of College Hall is cold. As I spend most of my life protesting to friends that Dundee is a sunny place - a veritable Scottish Marbella - this is somewhat disappointing. My fingers freeze up a little and I'm shivering, despite wearing a coat and scarf, which makes drawing tricky. The public all seem happy enough, and I eye their warming perambulations with envy. So many people stop to enquire about my work - perhaps intimidated by my perplexingly narrow-eyed stare - that there's barely time to draw comics anyway.

The people I meet can be roughly defined as twenty per cent curious newcomers to the medium, fifty per cent mainstream comic fans, and thirty per cent indie comic enthusiasts. There's a constant buzz of chatter and bonhomie, with a fairly equal male/female split and a sprinkling of young kids/babies and pensioners. A lot of the convention veterans around me are doing good business, and I enjoy hours of interesting chats with the steady stream of visitors to my table. Most people seem politely intrigued by Death Sentence and volunteer their email address so I can let them know how to buy the first issue in October. The day passes so quickly that I completely miss out on spending time in any of the other much warmer rooms at the Expo.

I eventually abandon my post to catch Mary and Bryan Talbot talk about their award winning graphic novel Dotter of my Father's Eyes. This splendid work concerns the lives of Lucia Joyce and Mary Talbot in conflict with their respective fathers, drawing resonances and parallels between two time periods. The Dundee Uni crowd ask a number of intelligent questions. Consequently we learnt a lot about how Mary's story emerged through research, dreams, intuition and hard work before Bryan brought the script to life in watercolour, pencil, ink and Photoshop. 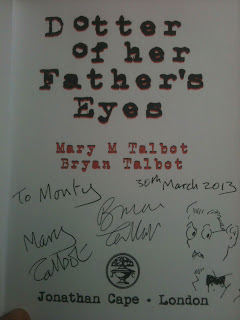 Thrillingly, as I get me copy signed, Bryan casually mentions that he has 100 pages of their new graphic novel on his iPad. It's called Sally Heathcote: Suffragette and concerns a fictional maid at the heart of feminist activism in Edwardian Britain. I flick through the artwork, entranced, as Bryan's enthusiasm for his collaborator Kate Charlesworth bubbles over. I ask about the division of labour and Bryan explains how he breaks down and lays out Mary's script before Kate draws and paints her pages on top.

The end product is very similar in style and tone to Dotter but more refined and polished in its finish. Some of Kate's watercolour paintings of historic London are beautiful and emotionally stirring. The story's told within a nine panel grid structure, switching to narrow eight panel layouts for oppressive 'incarceration' scenes evoking prison bars. Look for it at the end of this year.

On the way out I spy a graphic novel and cake stall and eagerly stock up on both. As I greedily stuff my face with carrot sponge I reflect on what a wonderful environment for discussing comics the lecture hall is, with its modern sound and multimedia facilities, comfy seats, well informed audience and thoroughly effective heating system.

Back at my frosty table the Dundee students next to me have imaginatively cut through the frozen floor to search for fish in the frigid depths below Between triumphant whoops they're also selling an excellent compilation of university comics work, Anthology Three, which features a cover by visiting lecturer Dave Gibbons.

As the shadows begin to lengthen I spy a kettle, tea, fresh milk and a plate of what I immediately decide are complimentary biscuits. Manna from heaven! I make us all a brew and we huddle round a notional brazier munching Jaffa cakes and discussing our comic experiences. With so many skilful enthusiasts in one room - David Lloyd, Gary Erskine, Jim Alexander, Gary Gray, and the Accent and Black Hearted Press crew to name a few - it's impossible not to feel inspired.

Personally, I couldn't be happier with how it went. Roll on Dundee Comics Day, this October.

• MontyNero is a writer and artist for 2000AD and the co-creator of Death Sentence with Mike Dowling for Clint and from Titan in October 2013. You can buy Death Sentence 01 on Amazon, Itunes, Kobo or Graphicly. Check out his official web site at www.montynero.com or follow him on Twitter, follow his blog or Tumblr