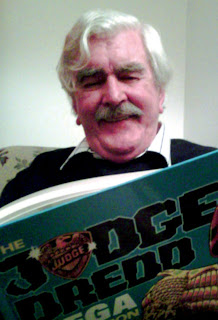 Legendary 2000AD artist Ron Smith is to appear at a signing in London to mark Free Comic Book Day – his first signing for well over a decade.

Revered by Judge Dredd fans for his satirical and, at times, bizarre take on the world of Mega-City One, the 89-year-old artist will be joined by writers Dan Abnett (Sinister Dexter, Insurrection) and Al Ewing (Zombo), and artist Ben Willsher (Judge Dredd) for this signing.

The event will take place from 1pm on 4th May at the Forbidden Planet Megastore on Shaftesbury Avenue, London.

A former Spitfire pilot and animator, Ron first appeared in 2000AD in 1978 before helping define Dredd’s futuristic world, from the League of Fatties to the craze for Otto Sump’s ‘ugly’ products.

Considered one of the ‘big four’ Dredd artists alongside Carlos Ezquerra, Mick McMahon, and Brian Bolland, Ron is also one of the most prolific artists in 2000AD’s history and his work continues to delight fans thanks to the best-selling Judge Dredd: The Complete Case Files series.


Ron also drew many of the Judge Dredd newspaper strips for the Daily Star. Beyond 2000AD, his comics credits, which date back to the 1950s, also include "Codename Warlord" for DC Thomson's Warlord, and he is credited with the creation of the British hero "King Cobra" for Hotspur, now revived in STRIP Magazine.

Now retired from illustration, Ron has not attended a public signing for many years and fans should grab this opportunity to meet one of the greatest Judge Dredd artists of all time.

Free Comic Book Day is an annual event in May each year aimed at helping promote local comic book stores and the comics industry in general. Participating shops across the world give away special comic books free to anyone who comes into their stores.

• Download a copy of the "Thank You, Ron" comic given to Ron last year, organised by the Everything Comes Back to 2000AD web site (zip file)
Posted by John Freeman at 8:00 pm