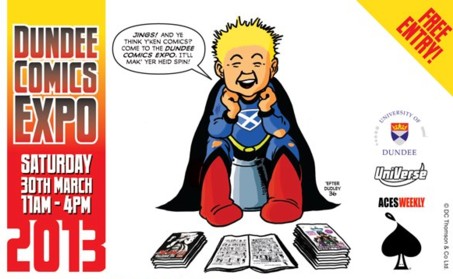 Saturday 30 March saw the inaugural Dundee Comics Expo at the University of Dundee. The university had been running the event that is now known as the Dundee Comics Day since 2008, a day of creator talks normally tied into an artwork exhibition plus one or two sales tables for attendees to buy books relating to the guests. It crosses the divide between a comics convention and an academic conference and is often highly social with guests chatting to the attendees in the university foyer between talks. 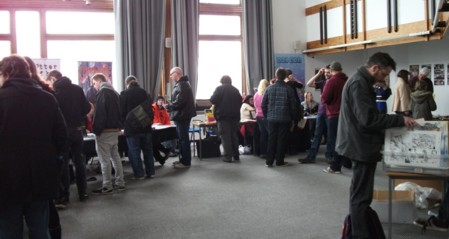 The Dundee Comics Expo came out of an idea the university lecturers had to run a Dundee comic mart but, with the desire to have an education element of workshops or talks, coupled with their contacts within the industry, that comic mart idea soon grew into a small convention. The university Tower Building where the Dundee Comics Day takes place provided the lecture theatre for the guest talks and the Baxter Suite (above) for workshops and sales tables, indeed they even managed to squeeze extra sales tables into the suite, more than were shown on the event’s map, without it feeling crowded. 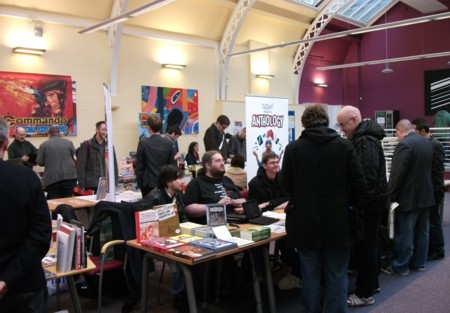 The university’s College Hall (above and below), a bright and airy hall that was very reminiscent of the Harland and Wolff drawing offices that the RMS Titanic was designed in, and just at the rear of the Tower Building, provided the rest of the sales table space. Indeed given that so many comics conventions have their sales tables in places with no windows, the College Hall with its high ceiling and large windows was a very people friendly space. 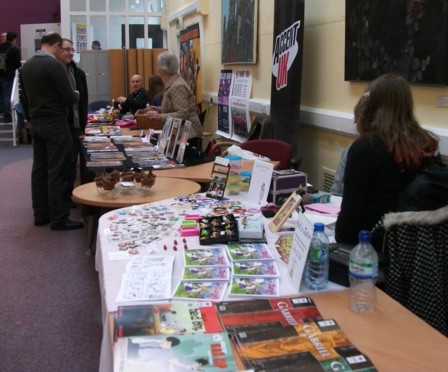 The guests included Costa Award winners Bryan and Mary Talbot, along with artists David Lloyd, Hannah Berry, and Nigel Dobbyn, all of whom gave talks and were happy to sign books. Local creators there included Gary Erskine, Alex Ronald, Team Girl Comic, Jim Alexander and Jim Stewart all selling their wares plus DC Thomson put on a Commando display including some of the merchandise that is normally only available directly from the DC Thomson shop. Needless to say, since it was a University of Dundee event, the students of the MLitt in Comic Studies and the DJCAD Comics and Animation courses were there promoting their UniVerse titles including the new Anthology Three which was launched on the day. 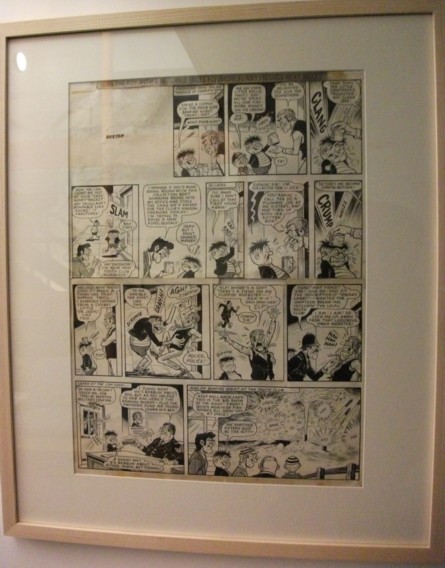 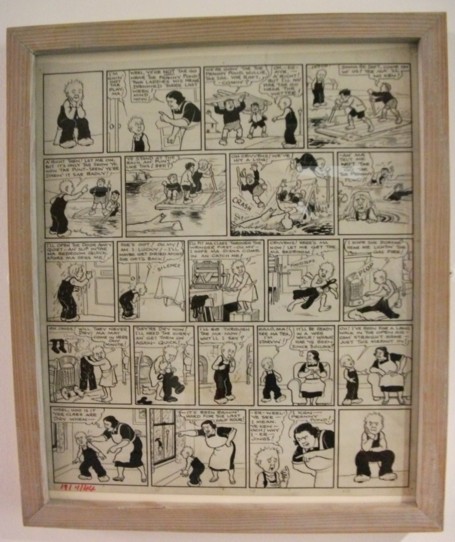 The day ended across the road from the university in the Dundee Contemporary Arts (DCA) venue where the excellent Judge Minty was screened with two Judge Dredd art-droids in attendance, and was then followed by DeeCAP, a performance event for comic creators. The DCA bar also provided the main evening meeting place for those who did not rush off to see the new Doctor Who companion.

The Dundee Comics Expo had a constant stream of people throughout the day but never seemed that busy perhaps due to it being split over three areas. As the first event of its kind taking place on a cold Easter Saturday in Dundee outside of term-time it was perhaps understandable that it was not as busy as it could have been but with big name guests and completely free of charge, it deserved a bigger turn-out than it seemed to get. However that benefited those attendees that were there as no long queues for any given guest or sellers tables meant that there was time to chat to all and sundry and that it made it a laid back and friendly event. 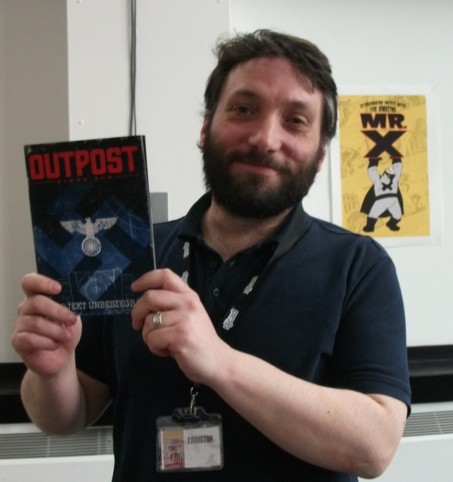 Art-droid Alex Ronald and his new self-published title Outpost: Black Sun, a prequel to the second Outpost film, with sepia art by Alex and written by Rae Brunton and Steve Barker. There are more details of the title at Alex’s blog. 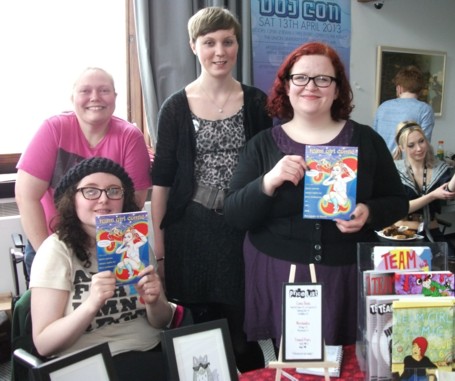 Team Girl Comic show off their latest issue, TGC 7, which is available from their website which also has the beginning of their new weekly web-comic. 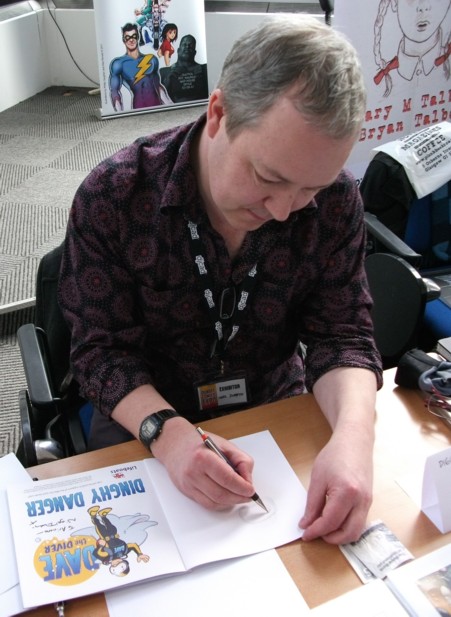 Nigel Dobbyn sketches his latest creation, the children’s story book character Dave The Diver. There are more details of this and Nigel’s other work on his website. 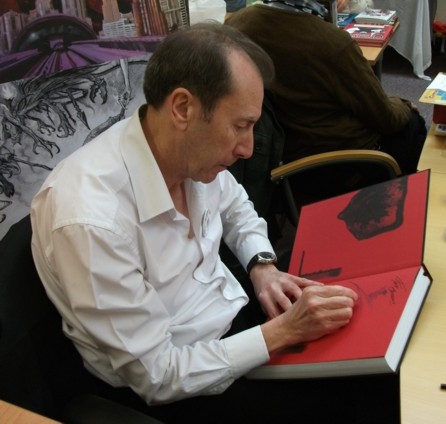 David Lloyd promoted his on-line comic Aces Weekly with a special deal of a free sketch when people bought a subscription to volume 1 – it proved rather popular. 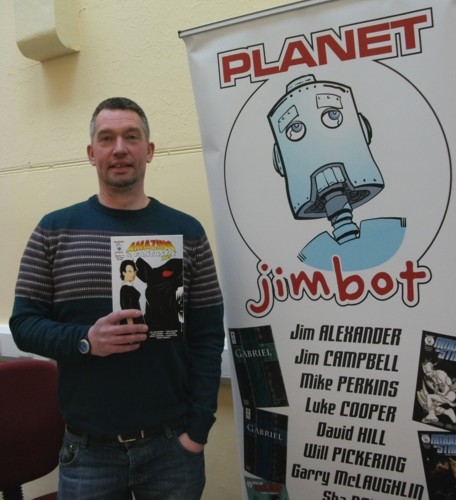 Jim Alexander shows off his latest title Planet Jimbot title, Amazing And Fantastic Tales, which he launched on the day. There are more details of this and his other titles on his blog. 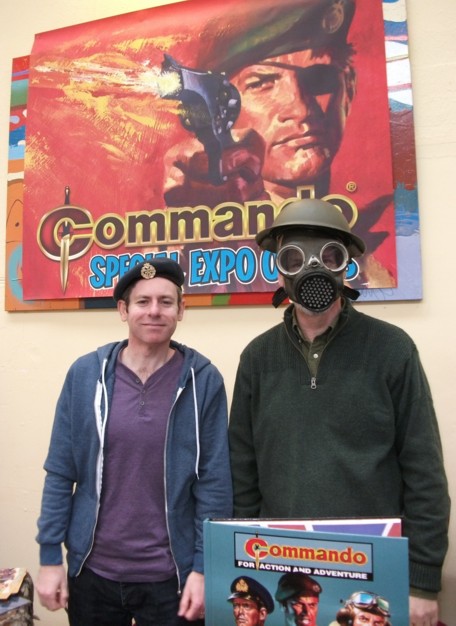 In disguise on the Commando table, deputy editor Scott Montgomery and editor Calum Laird with some of the Commando merchandise available from the DC Thomson on-line shop.

There are more images from the Dundee Comics Expo 2013 courtesy of Joe Gordon on the Forbidden Planet International blog.
Posted by Jeremy Briggs at 7:00 am

I enjoyed my visit and I hope that this event is repeated. The article above sums it up nicely. If any of the organisers read this, perhaps I could leave some feedback...
On a positive note the event was free, and had a good representation from different parts of the industry. The continuation into the DCA for the Judge Minty screening was great. What a superb venue the DCA is.
However I do feel that the comics expo suffered from being split into separate areas. There was a community atmosphere in the College Hall that didn't transfer across to the other areas. Anyone popping in out of curiosity, might not have ventured to the college hall, which was the heart of the expo. Possibly, because the event was split, I felt there was an aura of highbrow exclusivity. It wasn't always clear who was who, or what was on offer, just a sense that everyone should automatically know what they should be doing. Despite being a 40 year comic fan, I felt like an outsider in an exclusive club. Perhaps this was because the academic location gave the event an academic feel. The event was admittedly a hybrid of market, exhibition and learning, but it was not always clear which was which, or who was who. But I don't want to sound too negative. This was a pleasant free event that obviously took a lot of work and preparation to put together....and we did have a nice chat with Colin Mathieson who we had met at London Super Comic Con.