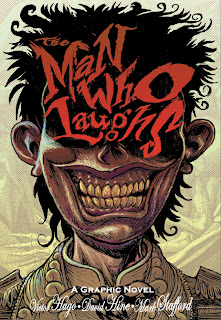 The Man Who Laughs, Victor Hugo’s scathing indictment of the injustice and inequality within Britain’s political system, is the latest graphic adaptation from publishers SelfMadeHero, released in paperback this month.

David Hine and Mark Stafford have produced a gripping adaptation of Hugo's story of abduction, mutilation, loss and prejudice that captures the macabre social satire of the original novel.

Set in 18th-century England, Gwynplaine is the two-year old heir to a rebel lord, who is abducted upon the orders of a vindictive monarch, who has him mutilated (to produce a permanent, grisly smile), then abandoned. After years of living frugally he is re-introduced to the aristocratic life, and resolves to become the voice of the voiceless, whether he is heard or not.

Victor Hugo wasone of the most prominent French writers and political figures of the 19th century, perhaps best nown for writing Les Misérables and The Hunchback of Notre-Dame. His influence can be found in the works of other great 19th-century European novelists such as Charles Dickens and Fyodor Dostoyevsky.

He wrote The Man Who Laughs while in exile on the Channel Islands. The book has been celebrated in film and theatre, but comic fans will know Batman creator Bob Kane found inspiration for the Joker’s look in the story – and Brian Bolland equally considered the silent film adaptation ideal source material for his own rendition of the macabre villain in Batman: The Killing Joke.

The adaptation is the work of David Hine and Mark Stafford. Hine has worked in comics since the 1980s, and has written for DC (Detective Comics, Arkham Unhinged), Marvel (Spider-Man Noir, X-Men, Silent War) Image (Storm Dogs), and 2000AD (Tao De Moto). It was during his work on Batman that he discovered the appearance of the Joker was based upon Gwynplaine’s likeness in the 1928 silent film adaptation of The Man Who Laughs.

Artist Mark Stafford is a cartoonist in residence at London’s Cartoon Museum. He has collaborated with Costa Award-winning creator Bryan Talbot on the Cherubs! graphic novels, painting dead hillbillies and writing about cinema for Electric Sheep magazine. Stafford previously collaborated with Hine on "The Colour Out of Space” for SelfMadeHero’s critically acclaimed Lovecraft Anthology Vol. I.

• Mark Stafford: www.hocus-baloney.com
Posted by John Freeman at 8:13 am