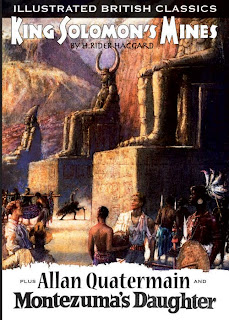 The strips are reproduced from the original artboards and have never looked better. Based on the novels by H Rider Haggard, the 'father of the lost-world genre'.

The Review: The first in a series (Volume 2 will feature Arthur Conan Doyle stories), this first collection of three British comic strips (albeit only one of the three in a 'modern' balloon and panel format) and it's a welcome collection. The stories were first published in Look and Learn and Ranger.

The adaptation of books to comic form has a long history offering both good and bad results. Many of a certain generation may have been introduced to the work of Dickens and his like through America's Classics Illustrated. (And of course, Classics Illustrated is still published  in the UK).

More recently, Classical Comics has delivered some stunning adaptations of Shakespeare, Bram Stoker, Mary Shelley and more, while SelfMadeHero have published Manga Shakespeare and other equally eye-catching and page-turning comic versions of famous novels - Rob Davis' quite brilliant version of Don Quixote and Ian Culbard's stunning At the Mountain of Madness, to name but two.

These publishers are continuing a long tradition of literary adaptations by British publishers and while the three strips in this first Illustrated British Classics may be slower paced, the artwork throughout is of an incredible quality, well deserving of this 'treasury' collection, created, luckily, from original art boards (luckily, because the treatment of art boards by most British publishers a most woeful tale of poor storage and ill-considered disposal to skips or through wholesale sell off).

King Solomon's Mines is one of the most famous of all adventure novels: Allan Quatermain helps find his friend's brother who is presumed lost deep in the unexplored interior of Africa whilst looking for the legendary mines. The artwork is some of Bill Baker's best, although he did not draw the full story: the equally talented C. L. Doughty took over part-way through, whose own style complements Baker's initial pages well. Speaking from my own recent experience, finding an artist whose style is a near match to another can be a fraught task. 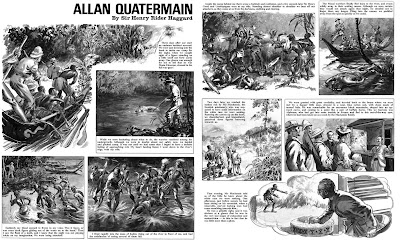 In Allan Quatermain, in mourning for his only son, Quatermain persuades his friends (jncluding Zulu chief Umslopogas) to accompany him into Maasai territory. Travelling by canoe, they find themselves in Zu-Vendis, a country ruled by an isolated warlike white race… The artwork is in line and wash by Mike Hubbard, who delivers some fantastic figure work and battle scenes. It's perhaps a rare story for its time, too, given the heroic status afforded the Zulu character.

(One should bear in mind that both Haggard's original tales and these adaptations were published at a time when general attitudes were very different). 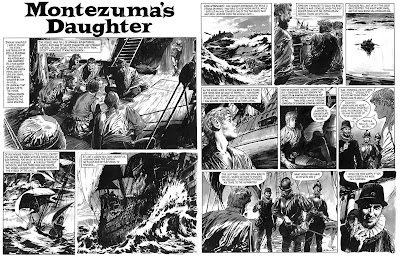 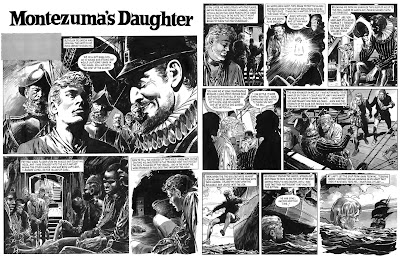 Montezuma's Daughter is the most modern story, superbly illustrated by Jesus Blasco, perhaps best known for his work on Steel Claw and Invasion for 2000AD. In the story,  Thomas Wingfield sets off to avenge the murder of his mother. After a brush with the Spanish Inquisition, shipwreck and slavery, his search leads him to the shores of Mexico where he is captured by the Aztecs. He is taken to the emperor who will decide his fate. Then the Spaniards arrive…

For me, this final strip is the best of the three, but it's a close call. Blasco's work and is attention to detail is simply breath-taking.

• Buy it from Book Palace Books here
Posted by John Freeman at 6:30 pm