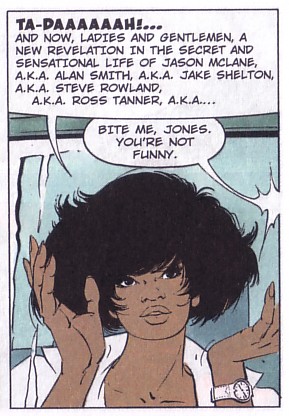 With our review of The Last Round, downthetubes has now reviewed all 18 of the XIII books published by Cinebook over the last two and a half years - from the beginning of the saga of the amnesiac agent in The Day Of The Black Sun, through two presidential assassinations in America plus an attempted military coup in between them, a Central American revolution and the search for century old Mexican gold coins, right up to its finale.

Written by Jean Van Hamme and translated by Jerome Saincantin, with art by William Vance plus a guest spot by Jean Giraud/Moebius, the series has been, along with Lucky Luke, one of the two mainstays of Cinebook since 2010 with a new XIII title appearing every two months as the company showed its dedication to a series which had never been translated beyond book three before.

Due to the non-graphic novel nature of the 13th French book, The Investigation, and it basically retelling the story up to that point, it was not included in the main Cinebook series although the company have plans to publish it in English later in the year.

Cinebook publisher Olivier Cadic and XIII translator Jerome Saincantin spoke to us about the series in 2011 in XIII Questions About XIII while each of the 18 book reviews are listed below.

2 - Where The Indian Walks

7 - The Night Of August Third


• Details of each of the XIII books are available on the Cinebook website along with the first two pages of artwork for each.

• Details of the original French XIII books, and the spin-off series XIII Mysteries, are available of the official XIII website (in French).

• View all the XIII books on amazon.co.uk