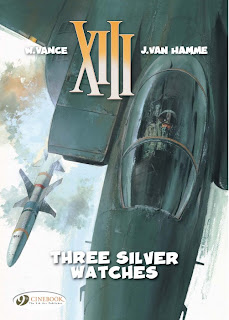 XIII - Three Silver Watches is about to tell us, at least from the point of view of his family history.

The revolution in Costa Verde is over and XIII's wife from his previous life, Maria, is now in charge just in time to discover that the former regime's military commander is planning to attack the capital with the remainder of his troops to take back the country. Maria orders XIII on a suicidal mission to blow-up the one bridge that the tanks must cross over to reach the city. American Sean Mullway goes with him and, as they travel towards the bridge, he uses the time to give XIII the history of his family beginning with three Irish friends who travelled to America to find their fortunes, married three sisters and who were each given a silver watch by their father-in-law.

From the first XIII book showed us all the covers and English titles for the 19 books in the XIII series, this particular book has always intrigued me - just what does the F-15 Eagle air-superiority fighter launching a Sparrow air-to-air missile on its cover have to do with three silver watches? The quick answer is - nothing. 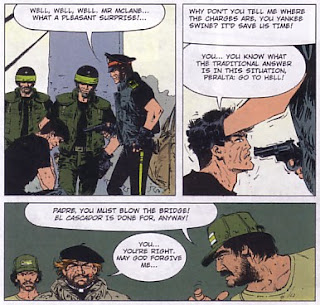 This is a book of two parts, the part in which XIII must lead a small team to destroy a bridge in Costa Verde that will prevent a column of tanks starting a counter revolution, and the part in which Mullway tells XIII a century's worth of his family history. It is the family history that is the most intriguing since the bridge plot, which by the characters' own admission sounds like a war film, only serves to give XIII something to do as he listens to the story of his family.

Indeed this sequence in the book is not helped by the F-15 being the wrong aircraft for the job firing a Sidewinder missile that, as well as being a different missile to the one on the cover, couldn't do what the plot needs it to do. It is the first time in 11 books that writer Jean Van Hamme and artist William Vance have made such a major mis-step in the technical hardware of the series. Vance's art is as accurate a depiction as reader's have come to expect of him which, ironically, is why I can say that the missile is the wrong type. While Van Hamme throws in a couple of the staples of the XIII series - Major Jones being able to fly any aircraft that is put in front of her as well as proving once again to be seemingly indestructible, Vance is able to add one of his own as yet another fight takes place in the rain. 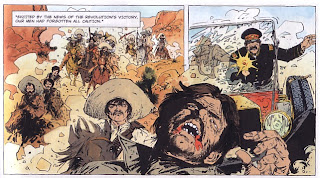 However for all the talk of bridges, planes and missiles, it is the family history that is the main part of this book and a major data dump as regards XIII the man. It begins slowly, almost like the "begats" at the beginning of the New Testament, where we were are inundated with names, marriages and children in a way that does make the reader wonder just where it is heading and if it might actually get interesting at some point. Then all of a sudden the three brothers are fighting for first one side and then the other in the Mexican civil war and the surnames of characters from earlier XIII books are introduced and previously unknown family relationships between them and XIII are established.

XIII the strip first appeared in issue 2408 of the weekly Spirou comic magazine in 1984, while this book was first published in French over ten years later. Had Van Hamme worked out the family relationships of his on-going plot at the beginning or, as the titles in the series sold well enough that the series was bound to continue, did he construct at least part of this family history around what he had already written? In all probability is the latter of these and this book, for all its flaws, just goes to show how skillful a writer he can be.

XIII - Three Silver Watches brings a new depth to the XIII saga and, with its new links to many of the series already established characters, presumably sets the scene for encounters yet to come. While the XIII books always leave me wanting to read the next in the series, this one leaves me wanting to reread it again to make sure that I have all this background information straight in my mind before I move on to those next books.