In Review: XIII - The Irish Version 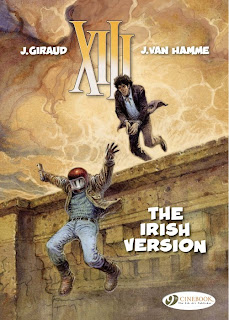 As XIII the series nears its end, writer Jean Van Hamme takes time out to explain the beginning of the saga, and just exactly who XIII the man is, in The Irish Version and forsakes his regular artist for Jean Giraud, better known as Moebius.

Two college students go up a mountain, but only one comes down, and that one goes on to become the amnesiac killer known as XIII. But which of the two men was it - the American political science freshman Jason Fly or the Irish history freshman Kelly Brian? Except that neither was really who they said they are - Jason Fly is actually Jason McLane, the son of a left-wing journalist, and Kelly Brian is actually Seamus O'Neil, an IRA killer. 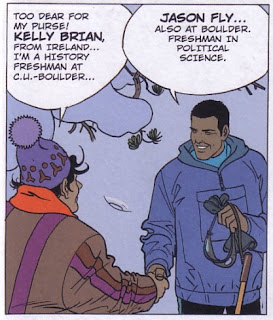 Long time readers of XIII already knew part of this story as it marked the chronological beginning of the "Who is XIII?" arc but here writer Jean Van Hamme gives readers the full story which acts as a stand-alone prequel to the entire XIII series. It begins with Seamus O'Neil telling Jason Fly/McLane his life story, not the cover story he had as a college student but the real one of growing up in Belfast during the Troubles and his desire to join the IRA told, obviously , from an anti-British republican perspective. This is then tied into the CIA's attempt to compromise O'Neil's cover using the rather familiar secretary of Dick Giordino. It all works very well indeed given that long time readers know what happens at the end, the big reveal here is who it happens to.

After Van Hamme's mis-step in Top Secret when he gave his IRA terrorist the unlikely name of Angus, and had him bizarrely fighting for the independence of Ulster, his research on the Troubles for this book is much better with real locations such as Crumlin Road Gaol and Court House coming to the fore. While the anti-car bomb measures around the Court House at the time would have prevented anyone jumping from its roof, as shown on the cover, actually reaching the roof of a lorry parked beside it, it makes for an intriguing, and very XIII-like, way for O'Neil to elude British justice. 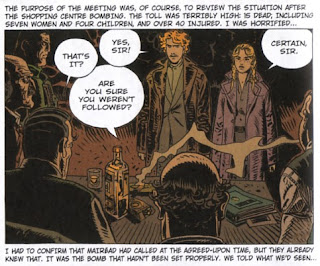 Giraud's artwork works well as a replacement for series regular artist William Vance, albeit it feels a little too darkly coloured at times due, in part, to the skulking around that the characters do. While it does have that inevitable feel to British eyes of a non-British artist drawing the United Kingdom, I'm sure that Vance's version would have been similar. However I suspect that Vance's knowledge of military hardware would have prevented the wrong armoured cars appearing and the rifles used by both sides being less generic than what actually appear. That said, while Cinebook have not made a fuss about the artist, any new English language book by Giraud/Moebius is to be appreciated at the moment.

XIII - The Irish Version is an impressive stand-alone prequel to the entire XIII series which works just as well for Jean Giraud/Moebius fans, who would not want to have to read the rest of the series to make sense of what is going on, as it does for regular XIII readers as a resolution to the question of just exactly who XIII is.