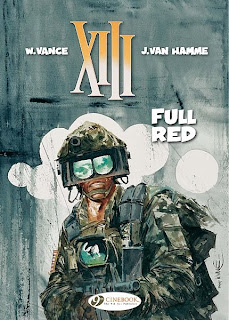 In the fifth XIII book, Full Red, writer Jean Van Hamme and artist William Vance take readers back to that presidential assassination from the first book and the repercussions of exactly why it happened.

Leading on directly from the fourth book SPADS, Full Red sees XIII returning to the US with his ally the mysterious Lieutenant Jones and SPAD Sergeant Betty Barnowsky only to discover that the people behind the Presidential assassination are moving to take over the United States by tricking the new President and instigating a coup during a massive military exercise codenamed Full Red. 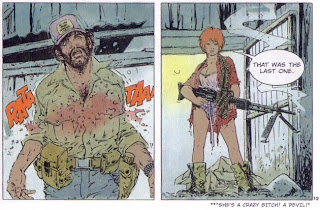 The previous book, SPADS, gave a lot of information about the character of XIII and just who he might be and was rather exposition heavy because of it. Full Red takes this one step further being virtually a book of two halves, both halves being violent and bloody. The first half is more languid and explanation heavy as the characters return to the US and discover that the military exercise is about to happen more quickly than expected, while the second half moves into 24 TV series mode as they have to quickly infiltrate the US military's Supreme Strategic Headquarters in an attempt to prevent the coup taking place. 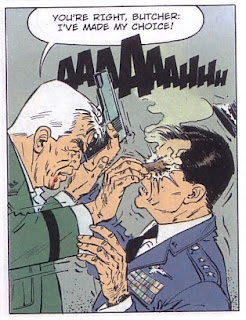 While the book does feel uneven due to this spilt in how the narrative moves, this is a Jean Van Hamme story and he is more than capable of leaving the reader both satisfied with the conclusion but with enough threads hanging to want to get on with reading the next book. Indeed this fifth book brings the presidential assassination plot of XIII to a conclusion and provides a pause in the ongoing story of who XIII is, why he has a roman numeral tattoo and just who or what the organisation that uses tattooed agents is.

Cinebook have taken the XIII books beyond both the previously published CatCom and Marvel translations and will continue the series into the next batch of stories at their ongoing rate of one book every other month. XIII is one of my favourite Cinebook series and Full Red shows that while the initial story of XIII is complete, there is a lot more to be discovered about the man and, fortunately, there are plenty more books in the series to enjoy those discoveries.

• The entire 48 page XIII Book 1, The Day Of The Black Sun (reviewed here), is available free with issue 5 of Comic Heroes magazine which is currently available in newsagents.

Posted by Jeremy Briggs at 4:55 pm