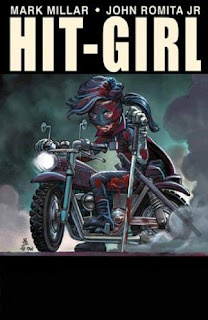 The Book: Hit-Girl spins off into her own blood-soaked saga in this prelude to the Kick-Ass 2 film. Mindy McCready tries to settle into life as a regular school-girl, but wants nothing more to be dispensing hot justice to the scum of New York City.

Her mother thinks she's doing her homework, but in reality she's taken Kick-Ass on as her sidekick and training him up to punch, shoot and stab ... just like Daddy would have wanted. And in return, Kick-Ass is helping her learn to survive middle school - without spilling anyone's blood.

But when Kick-Ass gets benched, leaving Mindy to take on the mafia solo, even Hit-Girl may be in over her head. Meanwhile, Red Mist pursues his goal of becoming a super-villain ... and faces a final test of his own. Hit-Girl is the first act of the upcoming Kick-Ass 2 movie!

The Review: Regular Mark Millar and Kick-Ass readers will know exactly what to expect from this stor and, sure enough, there's more than enough blood, high octane action, mass murder and shock moments to satisfy them. But what about the rest of us?

Despite a by now surely trademarked torture scene in its opening episode, this gritty, no holds-barred adventure, set in a world where real people turn superhero, only to find the role is often far from the comic books that inspired them, opens quite slowly. Millar focuses instead on character building: fleshing out the background to the psychotic 12-year-old vigilante, a girl trained for combat by an equally deranged, now dead father. A parent who clearly took to this ask with all the commitment to his work of one of those equally deranged parents that determines to turn their child into a tennis star or beauty pageant queen from the age of three.

This characterization, accompanied by moments of black humour, are what ensure the Kick-Ass series delivers an underlying if truly warped snapshot of humanity. "Nasty, brutish and short" pretty much sums Mindy up, as she fails in everything except her mission to kill bad guys, in the most brutal and revolting ways possible (feeding body parts through a lawn mower and decapitation being just two in this volume, in case you're wondering). Her inter personal skills are lousy: although her means to deal with a school bully - dropping her from a roof into a dumpster - will probably appeal to many. (Drugging her parents to cover her activities as Hit-Girl, probably less so).

Alongside Mindy's gruesome trail of death and vengeance, other threads continue to build in the background. The world's first super villain, Chris Genovese, is seeking vengeance for the death of his gangster father and heads to Asia to train with martial arts experts. He's ripped off, royally - but there's a twist in the tail by the end of the book which will cost Kick-Ass dear as the story continues.

The Kick-Ass series is brutal, bloody and steeped in violence. On the surface, it would appear to have no redeeming qualities whatsoever, appealing directly to a desensitised mass audience for whom the shock value of grisly death and violence has become some twisted norm. While Millar's storytelling pushes and exploits those demands, while perhaps overplaying the superhero and popular culture references, Hit-Girl proves a riveting, if horrifying, read because of his characterization, complemented by John Romita Jr.'s distinctive art.

Let me be clear: Hit-Girl is not a title for younger readers. This is nasty, violent fare, referencing and dependent to some degree on the audience's awareness and familiarity with not just superhero but gangster fiction. But it merges both genres to great, if unpleasant effect.