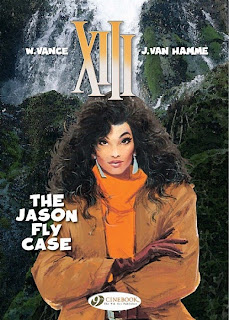 After all his name changes in the previous books it seems that XIII may be a US undercover agent called Jason Fly. Leaving the recuperating Major Jones behind, who isn't convinced XIII is Fly anyway, XIII heads for the hills and the snowy hamlet of Green Falls. This is where the case notes tell him Jason Fly lived as a child and he hopes that the place may spark some memories. In the near snowbound town he tries to piece together the death of Fly's father helped by the local newspaper proprietor and distracted by the dishy local pharmacist. However when he tries to speak to the first person he meets who actually knew Jason Fly, the local sheriff intervenes and events take a turn for the deadly with the reappearance of the man known as The Mongoose, who targets first Jones and then XIII himself. 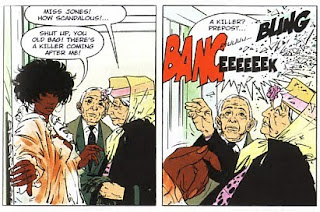 After the international events of Full Red, writer Jean Van Hamme takes XIII back to small town America and the series initial concept of finding out who the character really is while avoiding the deadly Mongoose. The Jason Fly Case is altogether quieter that the last couple of books giving both XIII and the reader a breather from the non-stop action as well as a small town mystery to ponder over. Of course it doesn't stop the body count rising or for that matter XIII's sidekick Jones ending up in yet another hospital bed. 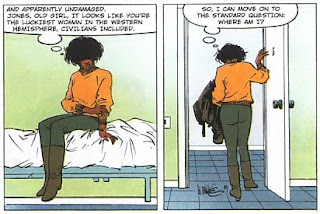 Originally published in 1989, William Vance's artwork does show a little of the cusp of the 1990s with Judith Warner's big hair and XIII driving a Volvo 480, but it really does not distract from the detailed scenery, and the action sequences, when they come, are his usual dynamic and violent best.

XIII - The Jason Fly Case is a change of pace for the series after the last few books but, if anything, it actually returns the series to is roots as XIII attempts to discover who he really is and that, after all, is what made the series interesting in the first place. With the book ending on a cliffhanger, nothing about Jason Fly is resolved and we will all be back in May 2011 for Book 7 - The Night Of August Third.


• There are more details of the English language XIII books on Cinebook's website.

• There are more details of the original French XIII albums on the official XIII website (in French).
Posted by Jeremy Briggs at 7:00 am