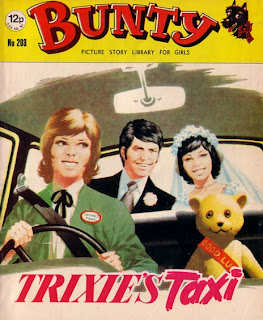 Here on downthetubes we regularly promote DC Thomson’s (and indeed the UK’s) last digest or ‘Picture Library’ comic, Commando, a title that has changed little in the half century since it was first published. As well as war, DCT’s boy’s digests also covered science fiction with Starblazer, and football with Football Picture Story Monthly.

But it is often forgotten that DC Thomson used to published a range of girl’s digests as well and, unlike the boys titles, these tied-in with the company’s range of girl’s weekly comics. Judy, Mandy, Debbie and even the long running Bunty had digest-sized siblings, all of which were tagged as Picture Story Library For Girls.

With the collecting bug of keeping comics not as prevalent amongst girls as it was amongst boys, old girls comics tend to be harder to find now than old boys comics are and, for most, these girl’s digest titles are all but forgotten. 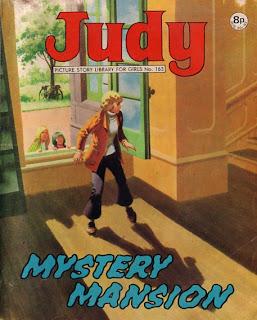 So it was a treat this week to be pointed towards a website that documents both Judy Picture Story Library and Bunty Picture Story Library with a very impressive selection of covers from both titles plus the beginnings of a selection from the Fleetway title June and School Friend Picture Library. Created by “Doeth”, the website shows how the style of covers of the two DCT titles changed over the years and, while the images are relatively small, it is possible to distinguish some of the artists who created them.

Ian Kennedy, with his artwork on well over 1000 issues, is today considered to be the pre-eminent Commando cover artist but in the past he also provided covers and strips for DCT’s girl's titles. Commando readers may enjoy the challenge of finding Ian's distinctive artwork amongst these hundreds of Judy Picture Story Library and Bunty Picture Story Library covers. We will give you a start with these two covers by Ian Kennedy.

The gallery of Judy Picture Story Library covers are here.

The gallery of Bunty Picture Story Library covers are here.

The gallery of Judy and School Friend Picture Library covers are here.
Posted by Jeremy Briggs at 7:00 am