In Review: XIII - The Last Round 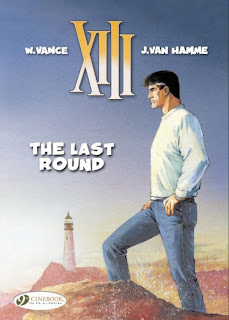 It has been a long haul, 18 books over almost two and a half years, but Cinebook have stuck with Jean Van Hamme and William Vance's amnesiac tattooed agent XIII and that has lead us all to the final book of the series, The Last Round.

XIII and his friends are still in their safe house in Mexico as they decide what must be done to clear their names in the USA where, unknown to them, two books have been published about the "XIII Mystery" which has made what has been happening public. However before they have a chance to return to the States, their safe house is discovered and attacked. 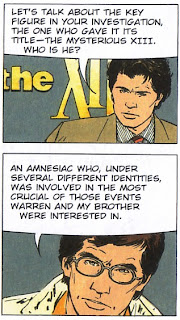 Pretty much everyone who has survived the last 17 books is in here which is as it should be as the series comes to a conclusion. The last couple of books have tied up the plotlines of the Mexican gold and just exactly who XIII is, although XIII doesn't yet know, which leaves Van Hamme with the problem of clearing the name of a supposed presidential assassin and IRA terrorist in front of a fascinated media which have just read two expose books about the XIII events.

One of these fictional books, The XIII Investigation, is the original 13th French book that Cinebook skipped in their series as it was neither a regular graphic novel nor vital to the ongoing plot due to it retelling what had happened in the series up to that point, while the other fictional book, The Kelly Brian Story, appropriately released by Moebius Publishing, is the equivalent of the XIII series' prequel title The Irish Version illustrated by Jean Giraud.

It is hard to say much about the plot of The Last Round without giving too much away, but Jean Van Hamme gives us an instalment that is both action packed and full of political intrigue as the different factions try to manoeuvre themselves to safety. 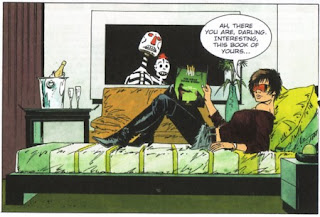 As always William Vance's artwork is more than up to the job and, while it was nice to see Jean Giraud's take on the characters' younger selves in the previous title, it is good to see Vance back with his planes, explosions and close-ups of pretty women - and he even manages to squeeze another fight in the rain in there as well.

I first read XIII via CatCom's Code XIII American publication of The Day of The Black Sun, the first book in the series, but I never expected that any English language publisher would ever have the dedication to get deep into the series let alone finish it. It is to Cinebook's credit that they did and, given that it has been such a backbone of their publishing schedule over the last few years, it will be interesting to see what they choose to replace it with.

XIII - The Last Round is a more than satisfying conclusion to a series that has never disappointed over a total of 18 books. If you haven't indulged yet, what are you waiting for?