Prisoners of Time: An Interview with artist Mike Collins 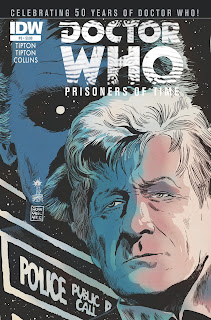 'Prisoners of Time' will feature every incarnation of the Doctor, as well as a long list of villains, some new, some old.

downthetubes caught up with Issue Three's artist Mike Collins, whose both written and drawn several Doctor Who tales down the years

Entering the industry in the mid 1980s, smuggled in under Alan Moore's beard, he drew Alan's Dourdevil - Man Without A Sense of Humour strip for Marvel UK. After that he worked as writer/co-artist on a short-lived Spider-Man UK strip, then moved onto various licensed properties (pretty much all there was at the time): Transformers, He-Man, Action Force, Thundercats, Zoids and oh so many more.

It was here he began his long-running connection with Doctor Who, as occasional writer on the Doctor Who Magazine strip, writing adventures featuring the Sixth and Seventh Doctors (and later drawing Sylvester McCoy while I was editing the title).

Branching out to 2000AD, Mike drew Slaine and Judge Dredd. He was one of the artists press-ganged in the Second DC Wave, working on various of their superhero and fantasy books - Flash, Teen Titans, Dragonlance, Spelljammer amongst them. At the same time he served as artist on the Judge Dredd newspaper strip for the Daily Star.

A brief dalliance at Marvel had him working on Sub Mariner and the X-Men (drawing the first appearance of Gambit), returning to DC to write and draw Peter Cannon: Thunderbolt, then Star Trek, Babylon 5 and various JLA titles, and solo hero books including Wonder Woman, Batman and Superman.

In the last decade he's worked on a series of Norse Noir albums for the Norwegian market Varg Veum, took over the long running Panini Doctor Who Magazine comic strip when the TV series returned, and co-created American Gothic with Ian Edginton for 2000AD.

He's storyboarded for various pre-school TV shows, amongst them: Grandpa in My Pocket, Claude, Hana's Helpline, Igam Ogam and Horrid Henry. Definitely not for pre-school, he also boarded on the recent Warhammer 40k CGI movie. He's also boarded adverts for Colmans, Coca Cola, amongst others.

Outside of comics, he's illustrated for various magazines and newspapers, and runs workshops for schools and libraries using comics, primarily for the Read A Million Words In Wales campaign. 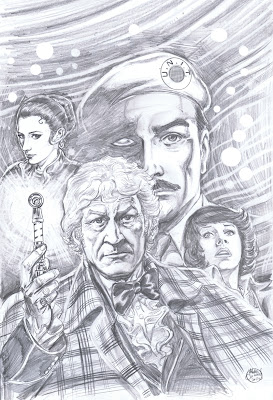 downthetubes: Prisoners of Time is far from your first Doctor Who project but I gather you have a particular fondness for the Third Doctor's era of the show?


Mike Collins: Pertwee was 'my' Doctor - as a little un, I was terrified by the odd snippets I saw of the show (I remember an episode of The Krotons that I caught, maybe round a friends house, but got traumatized by it). I was a bit of a wimp as a kid. When Pertwee took over I was 8, 9... old enough to cope with the scary stuff! So for me, Pertwee was the Doctor.
Just like the comics you read at 11 are the best ever, whoever is the Doctor at that age is best. (Though if I'm dispassionate about it, Matt Smith is absolutely the best Doctor ever.)

Watching back to back old stories, it's obvious that some of them were better than others, inevitably but Holy Crow, they're so slow! It's the starkest testament to the way we've become inured to rapid cuts and compressed storytelling: you probably get as much plot in a modern 40/45 minute episode as a four part plot back then!

When the Pertwee stories are good though, they're really good: there's a level of sophistication in the plotting and themes that sailed far over my pre-teen sensibilities. When you get past the not-even-Chewits Godzilla ad stop motion SFX, Invasion of the Dinosaurs plays like a cross between a Troy Kennedy-Martin thriller and - in one subplot- a JG Ballard 13 To Arcturus riff. Amazing for a family TV show.

Mike: The Brig, Liz Shaw and Sarah-Jane. If the Tiptons could have shoehorned Jo Grant and Sergeant Benton in there, I'd've had a full house.

downthetubes: Is there an old TV Monster in this part of the story?

Mike: They're new monsters but fit in exactly with the feel of the best Pertwee stories, as they address ecological and political issues. I can say no more!

Mike: Likenesses have been - I hope- one of my strengths over the years. I develop a shorthand for the characters so that if they don't look exactly like the actors, they should look how you think the actors look - it's a bit of a trick - I discovered on the Panini strip that getting screen grabs off episodes is great but the actors mid-scene hardly ever look like themselves.

Mike: I had a clear idea in my head when I started this that it should feel like a 70s strip, that aspects of the storytelling and page design should be authentic to the period. I slipped in a couple of TV Century 21 panel designs to add to the ambiance.

downthetubes: You've both drawn and written Doctor Who - do you have a specific approach to tackling adventures for the franchise?

Mike: I always refer to the brief at Panini: always conceive adventures that TV couldn't afford to stage!

A digression: I've written and drawn Star Trek properties for Marvel and DC. I realized that for DC I was creating Trek stories in comics form but for Marvel, it was a Marvel story that just happened to be about Star Trek... does that make sense to anyone besides me?

downthetubes: Which Doctor Who story you've worked on has been your favourite to date?

Mike: Not dismissing anything I did after, there have been some amazing stories but my favourite Who comic strip I've drawn is The Cruel Sea, written by Rob Shearman, still his only comic script I think. He used the format and genres of comics in a way I've never seen anyone within the industry approach... brilliantly barmy.

In terms of things I've written, episode 2 of The Futurists is probably the tightest scripts I've ever done, and the jokes actually work, also, I ended with the villains proclaiming 'Now WE are the Lords of Time!' which could've be the corniest payoffs but I seemed to get away with it. I could've written a dozen episodes around the Welsh versions of Asterix I'd accidentally created there.

Mike: Go anywhere, do anything. Be decent, save lives, right wrongs. It's a concept that reinvents itself every story, every new location.

downthetubes: What's your next project and when is it on sale?

Mike: Currently running in the Judge Dredd Megazine is a three parter featuring Hondo City being besieged by Zombie Samurai. Written by Robbie Morrison, inked by Cliff Robinson and coloured by Len O'Grady, all doing stand-out work it's up there with the art I'm most proud of in my career. And it has ZOMBIE SAMURAI fer gawds sake!

Other than that, I'm back storyboarding for telly right now, on the new season of pre-school fave Igam Ogam... Upcoming for comics, I'm drawing an utterly brilliant Dredd for the Megazine written by old mate Ian Edginton which harks back to Dredd's roots through the darker lens of today. And is very, very funny.

Mike: Draw every day, draw everything. I've sketchbooks full of drawings of foreign walls, plug sockets, window frames. Be aware of the world around you and infuse your work with a plausibility even if you're drawing a 40 foot tall jellyfish in a time vortex full of ruined worlds. Make the reader believe those panel borders aren't ruled lines around your pictures but window frames into worlds that-if you could push through and look around- extend to infinity.

• Doctor Who: Prisoners of Time #3 written by Scott and David Tipton with art by Mike Collins is on sale from 27th March from IDW Publishing.

• Read our interview with Simon Fraser, who drew Prisoners of Time #1

• Read our interview with Lee Sullivan, who drew Prisoners of Time #2

• More about IDW's Doctor Who range on the official web site

• Read an interview with David and Scott Tipton about the maxi series on Comic Book Resources
Posted by John Freeman at 8:30 am