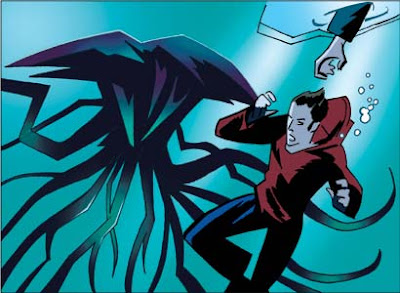 Titan Magazines, publishers of Torchwood Magazine, have partnered up with UK digital channel Watch to offer an exclusive Torchwood strip on their web site, as part of their promotion for the screening of Torchwood Season Two.

The strip has been written by Brian Minchin, a Script Editor and Assistant Producer on Torchwood and drawn by Adrian Salmon, whose credits also include Doctor Who, Judge Dredd: The Megazine and many more. He also co-created Image Comics’ The Faceless graphic novel, starring Terry Sharp.

The strip is lettered by John Workman, one of comics’ most famous letterers, who has worked on comics by Walt Simonson, Grant Morrison and others.

In other Torchwood-related news, a quick reminder that Issue 14, on sale this week in the UK, will feature an original comic strip written by none other than Captain Jack himself, John Barrowman, and his sister, and regular collaborator, Carole E. Barrowman (see earlier news story).

The story, entitled Captain Jack and the Selkie, drawn by Tommy Lee Edwards and Trevor Goring, sees Captain Jack facing a deadly threat on a remote Scottish island, where people are disappearing one by one... To his horror, Jack starts to suspect he may know who – or perhaps more specifically what – is responsible...