Comics International #207 - On Sale At Last 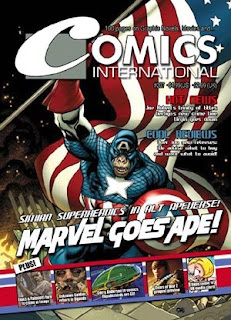 Much delayed, Comics International #207 is now on sale, offering a variety of comics features, reviews and news items covering comics on both sides of the Atlantic (and beyond).

Also in the issue is an interview with Jason Wilson, co-creator of the controversial Smuggling Vacation graphic novel.

While some of the issue's coverage of the comics world is perhaps a little dated by force of circumstance -- those circumstances not explained in the magazine, which is sure to puzzle subscribers and others -- downthetubes is assured the team fully intend to make certain #208 is not6 so long a wait, and two Comics International Specials are even now close to completion to complement the Magazine. (More news on those soon).

• Comics International is available now from comic shops and the official web site
Posted by John Freeman at 10:52 pm