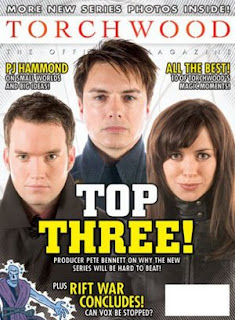 Titan Magazines has confirmed that Doctor Who and Torchwood actor John "Captain Jack" Barrowman will be co-writing an episode of an upcoming Torchwood Magazine comic strip.

Issue 14 of the Magazine, on sale 19 February in the UK, will feature an original Torchwood comic strip, written by John and his sister and regular collaborator, Carole E. Barrowman.
The story, called Captain Jack and the Selkie, sees Captain Jack facing a deadly threat on a remote Scottish island, where people are disappearing one by one... To his horror, Jack starts to suspect he may know who – or perhaps more specifically what – is responsible...

Selkie is the Orkney dialect word for "seal" and with so many seals in the waters around this and other Scottish islands, it's not hard to see how the legends surrounding the selkie-folk - the seal people - sprang into life. (More about Selkie Folk myth here)

Artwork for the comic strip is provided by Tommy Lee Edwards, the acclaimed artist behind several stunning comic projects including Marvel’s current smash hit 1985, the acclaimed Bullet Points, DC’s The Question and several more, and Birmingham-born artist Trevor Goring, whose work includes Dead Like Me and Star Trek and who has worked as a storyboard artist on films such as Independence Day, Fantastic Four and Twilight.

“I’m so excited to be working on this story," says strip editor Martin Eden, speaking on the Torchwood Facebook page. "John and Carole are an absolute pleasure to work with. And Tommy Lee Edwards is one of my favourite artists.

"I’ve seen the thumbnails that Tommy and Trevor have worked on – and, believe me, the readers are in for a treat!”