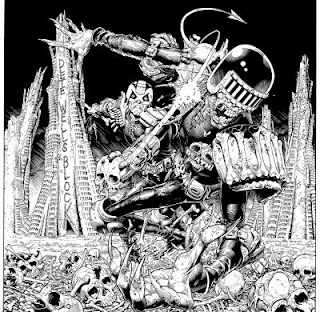 • Talking of 2000AD, on Saturday 21st March between 1 and 2.30pm, the Forbidden Planet Mega Store in London is having its 30th Anniversary Signing. Artists and writers lined up include Dan Abnett, David Bishop, Simon Davis, Rufus Dayglo, Al Ewing, Brett Ewins, Henry Flint, Robbie Morrison, Tony Lee, Matt Smith and Simon Spurrier. "It'll be a cracker!" says Rufus. Indeed - and you should be able to pick up the paperback edition of David Bishop's Thrill-Powered Overload, too. Click here for the latest info from the Forbidden Planet web site

• Had enough of the Watchmen movie yet? No? Well, you'll be pleased to hear (via Geek Syndicate) that the World Premiere date has been set and it will be in London's Leicester Square on 26th February. No info as yet as to who’s going to be attending in terms of cast and crew but if a very large man sporting a very large beard with firey eyes turns up, we advise anyone in the crowd to run away very quickly...

• We haven't mentioned Steve Holland's brilliant Bear Alley blog in a while, so with a Gerry Anderson feature proving one of the highlights of the latest Comics International, it's somewhat fortuitous that he's come across a behind the scenes article from 1965 reporting from the set of early Supermarionation series, Stingray.

• Another British comics archivist has been quiet, too, Lew Stringer pretty busy with all sorts of projects. But he's sprung back with a terrific post profiling the early career of League of Extraordinary Gentlemen artist "With the publication of the next League volume, Century:1910 due in a few months, I thought it might be appropriate to take a rare glimpse into the early days of this extraordinary artist," says Lew.

• (via Forbidden Planet International): And finally, Paul Gravett has posted up his choice of ten (living) British comics creators who have been most innovative and influential in the comics medium both here and worldwide. "Not an easy job given how many British writers and artists have achieved a great international reputation," notes FPI's Joe Gordon. "I’m sure some some will wonder why their favoured creators aren’t in the list, but as with any such shortlist it’s open to debate and these are Paul’s personal choices, I’m quite sure he’d be more than happy to hear other names suggested... but the problem is its hard to think who from Paul’s list I would cut to make room for some I was considering... I’m sure it will get some debate - what do you think?"
Posted by John Freeman at 3:06 pm