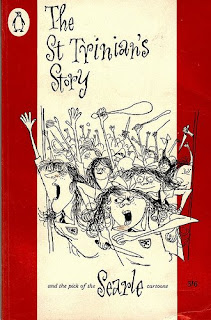 For those of you unfamiliar, Ronald Searle was an accomplished British cartoonist whose credits included Punch, but he's better known as the man who created the girls of St. Trinians and anarchic 1950s schoolboy Nigel Molesworth.

The Ronald Searle Tribute blog is compiled by several Searle experts, headed up by freelance artist Matt Jones, who works in the animation industry in France. Most recently he's been storyboarding on BiboFilms' A Monster In Paris.

This is a another of those great finds you come across completely by accident on the web, with details of new releases, art samples, exhibition news, uself Searle links and much more.

Check it out at: http://ronaldsearle.blogspot.com

The ronaldsearle.co.uk web site offers this potted bio of Searle, whose work has surely influenced many a British comics artist:

"Searle was born in Cambridge in 1920 and was educated there at the Cambridge School of Art. On the outbreak of the Second World War he left his studies to serve in the Royal Engineers and in 1942 was captured by the Japanese at Singapore, then held by them for three and a half years.

"He is a hugely successful graphic artist and pictorial satirist. As well as his collaboration with Geoffrey Willans on the Molesworth books and his invention of St Trinians, his work has been the subject of numerous exhibitions across the world and appears in several major American and European collections.

Thanks for the plug! Lots of exciting news coming this year for Searle fans to celebrate his ninetieth birthday!