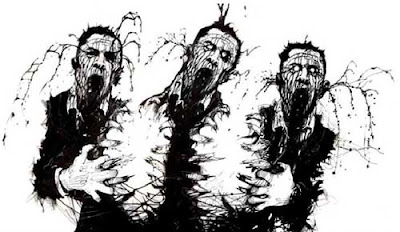 2000AD artist Johnny Hicklenton features in a documentary on More4 tonight about his lengthy battle with multiple sclerosis, which we reported on last year.

Johnny lives in an increasing state of immobility and frustration, escaping the confines of his front room through his artwork. Here's Johnny follows the seven years of his life since he was diagnosed with MS, a moving expression of his thoughts and feelings as well as artistic interpretations of key moments in his fight against the disease.

John cannot move without a wheelchair and is often confined to his west London home. He talks candidly about his problems in the film, but also with great humour; at times he has relied utterly on that to see him through some very bleak days.

The Daily Telegraph reported last year that when the British comic artist, perhaps best known for his brutal, visceral work on 2000AD characters such as Judge Dredd, learnt that he had multiple sclerosis, the news was delivered with a brutality that stuns him still - nearly seven years later.

"The doctor, a locum, just stared at her computer screen," he told the Telegraph, "and never once looking at me, said: 'You've got MS. You'll be dead in 12 to 15 years.' Just like that." Her remit, he says, was presumably not to become emotionally engaged.

Johnny's is the opposite, and is now passionately involved in a fight against what he terms "this terrorist illness".

Now virtually bed-bound, John talks candidly about his illness in the documentary, made by Animal Monday and funded by the Channel 4 British Documentary Foundation and the Wellcome Trust.

(With thanks to Paul O'Connell)

Update: John died in early 2010. Pat Mills, who often worked with John, looks back at the career of an extraordinarily talented artist here on the downthetubes main site, a version of his feature for Judge Dredd: The Megazine which has also appeared elsewhere online.
Posted by John Freeman at 1:49 pm