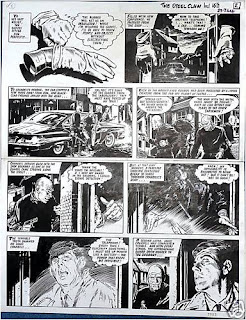 Artwork from Steel Claw from Valiant, Robot Archie from Lion and Black Bow from Eagle is currently on sale on eBay, more work that was sold off by IPC a couple of years ago when it cleared its archives.

The offerings are all being auctioned by Blase Books as being from the Peter Hansen Five Star Collection IPC Archives, with a stamp of authenticity on the back of the art.

Also on offer for just a few more days is a page of Black Bow by Frank Humphries from Eagle; a page of Kelly's Eye art by Solano Lopez from a 1973 edition of Valiant; and a page of The Spider, fighting Spider-Boy, from Lion by Reg Bunn.

While IPC considered itself within its rights to sell the comic art back in 2007, some surviving artists have hotly contested their claim to ownership of the physical art featured in many past comics, arguing the company only holds rights to publish not ownership to the art. There has been no test case, we believe, as to the ownership of the physical art but we believe it's only a matter of time before there is.

However, it should also be noted that some publishers in the past demanded a fee from the artists for the return of their art. In an upmcoming interview a Misty comic special, veteran girls comic artist John Armstrong indicates this was the demand of Fleetway when he worked on that title.

Rich Johnston then noted in his Lying in the Gutters column for Comic Book Resources that artist Pura Campos was battling to have IPC recognize her ownership of Patty's World, which featured in Princess Tina in the UK but was reprinted in several other countires and still has a massive following in Pura's home country, Spain.
Posted by John Freeman at 7:46 pm

Didn't Leo Baxendale win his (not insubstantial, not disclosed) wedge on the grounds that DC Thomson may have owned the artwork as a whole, but he owned the actual ink and paper he used to produce it?

I reckon I shall have to reread Funny Old Business, my curiosity is tickled!