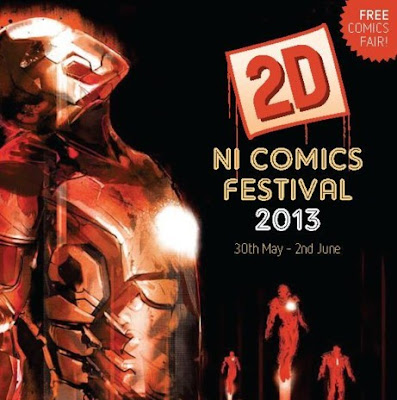 This year's 2D Comics Festival in the UK's 2013 City of Culture, Derry-Londonderry, was the largest comics event ever held in Northern Ireland. With talks and work shops in the days running up to the weekend, the weekend itself had a family friendly cosplay event and a free comics fair during the day at the city's Millennium Forum plus evening talks in Sandino's Bar. 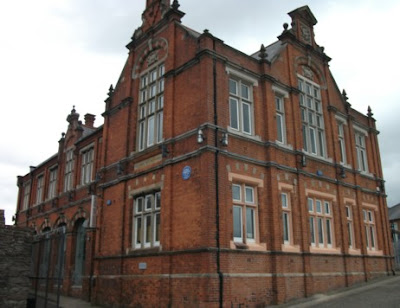 Organised as it has been for each year since 2007 by the Verbal Arts Centre (above), it has outgrown the 19th century former school and so this was first year that 2D has moved from its spiritual home, and into the much larger Millennium Forum theatre and conference centre also just within the city's defensive walls. This year the Verbal Arts Centre building was retained for an exhibition of local artist Will Simpson's film and television work including that on the biggest TV series to be filmed in Northern Ireland, Game Of Thrones. The Millennium Forum (below) is a much more modern building with considerably more room to move around and generally be able to breathe. Built to cope with the hilly section of the city where the old wall actually runs beneath a road, the building has multiple levels with the main doors being, disconcertingly, at the top. 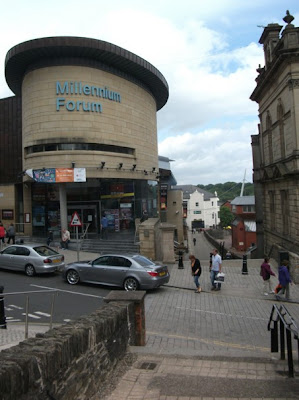 The main atrium of the building was used for the 2D Comics Fair with tables squeezed into every space, from the entrance hall via various bridges and landings, to the main lower floor and even beyond. The layout of this at first glance seemed a little chaotic but realisation soon dawned that the organisers had blocked certain routes to ensure that everyone walked past all the various tables before arriving at the main floor level. Indeed the various guests were spaced around the building with each area having several guest artists meaning that there really were no sections that could be ignored. 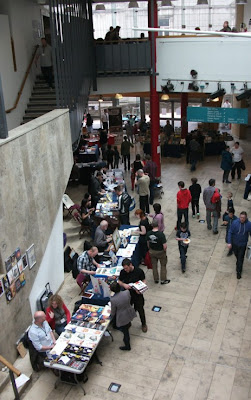 And the organisers were not ignoring their guests either with drinks and food being provided and even paper being offered to the artists in case they had run out. 2D has a good reputation amongst its guests and it was not hard to see why. 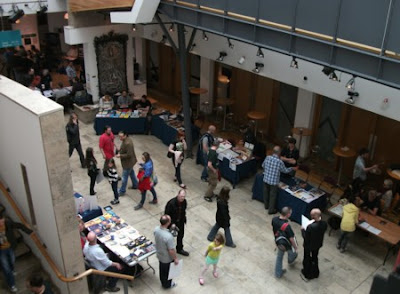 As it was free entry to the Comics Fair, there was a varied cross-section of punters around with, on the Sunday at least, few cosplayers to be seen other than those taking part in the Heroes and Legends event deeper in the building.

The city's local creators are Uproar Comics who came together through previous 2Ds and the 2D Collective offshoot. They publish the Zombies Hi title which is an anthology of the main ongoing Zombies Hi story backed up with short zombie text stories and comic strip, and is widely distributed within Northern Ireland. Writer Danny McLaughlin (left) was more than happy to talk about both zombies and their new standalone title, The Ballad of Half Hanged McNaghten, while artist Kevin Logue (right) drew attendees as zombies.

There are more details of all Uproar Comics publications on their website. 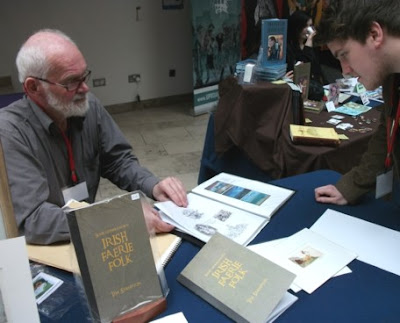 From across the border, and the Atlantic, was Canadian artist and Co Donegal resident Tim Stampton who was displaying some lovely watercolours of folkloric figures which he had combined into a softcover book entitled Irish Faerie Folk.

There are more details of Tim Stampton's work on his website. 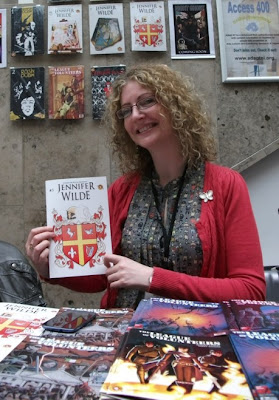 Also from the Republic of Ireland, yet a familiar face at UK conventions, was writer Maura McHugh. As well as books and plays, Maura writes two title's for Dublin's Atomic Diner comics, Roisin Dubh and Jennifer Wilde. The third and concluding issue of Jennifer Wilde was hot of the presses, as Maura shows above, while the third issue of Roisin Dubh is due imminently.

There are more details of all Maura's work on her website which includes her own thoughts on 2D 2013. 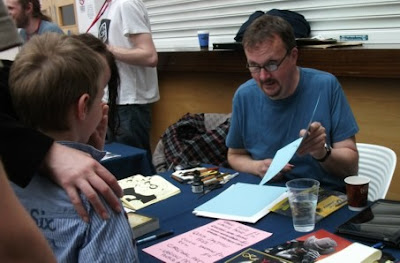 Back north of the border and Belfast artist Davy Francis who worked on IPC's Monster Fun and Oink as well as a wide variety of Northern Ireland small press zines. Like most of the artists at 2D Davy was providing quick sketches for free and here he provides one young fan with a image of Spiderman.

There are more details of Davy Francis' work on the Irish Comics Wiki. 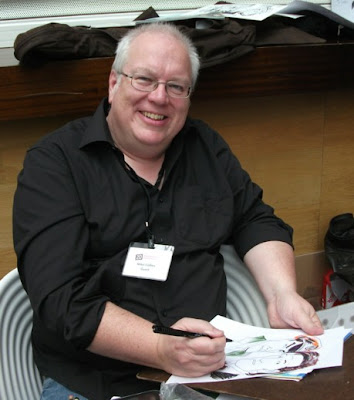 Sitting beside Davy was Welsh artist Mike Collins perhaps best known these days for his Doctor Who work including the two Dalek graphic novels published by BBC Books. Here he is sketching an unusual mix of the eleventh Doctor and Dan Dare.

There are more details of Mike's work on his website. From Wales to Scotland and artist Gary Erskine who was there with his wife Mhairi Stewart who run workshops under the Perfect Spiral name. One of Gary's latest titles is the fourth Doctor and Leela episode of IDW's Doctor Who: Prisoners Of Time, while his own project, Roller Grrrls, skates closer to publication.

There are more details of Gary's work on the Scotch Corner blog and the Perfect Spiral website. 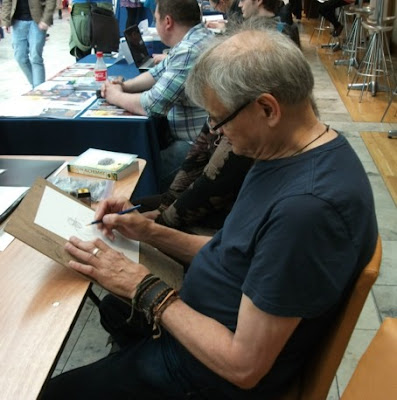 Marvel artist Herb Trimpe was a major US guest perhaps best known for his run on The Incredible Hulk during which time he drew the very first appearance of Wolverine in 1974. He was selling original Marvel artwork pages as well as doing sketches. 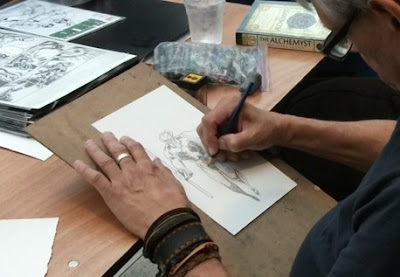 There are more details of Herb's work on the Marvel Comics Database. 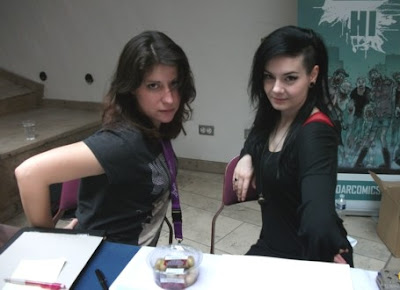 Artists and writers Emma Vieceli (left) and Kate Brown (right) were also there promoting, amongst other things, Emma's work on The Avalon Chronicles and Kate's work on The Phoenix. They decided that as downthetubes is a serious blog that they should do a serious pose - and this was one serious pose... 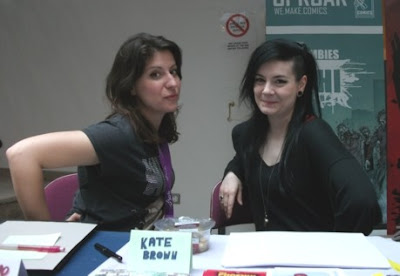 Of course to hold a serious pose you have to remain serious and as soon as Kate started to smile... 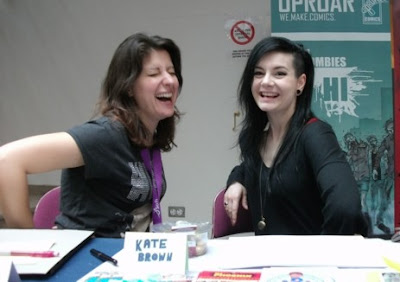 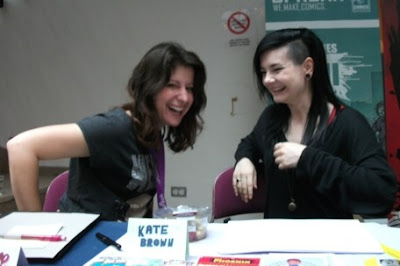 Was it something I said? Sorry to disappoint, but I couldn't possibly repeat it - what happens at 2D stays at 2D! 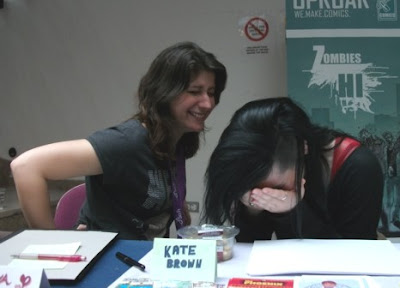 Yet these photos seem sum up the friendly and fun atmosphere of 2D for both the guests and the punters. That is the sort of atmosphere that organiser David Campbell and his team set out to achieve each year and, once again, in 2013 they have achieved it.

There is more information on 2D, the Northern Ireland Comics Festival, on the the 2D website and Facebook page.
Posted by Jeremy Briggs at 7:00 am