Gromit gets "Beano-fied" in a good cause! 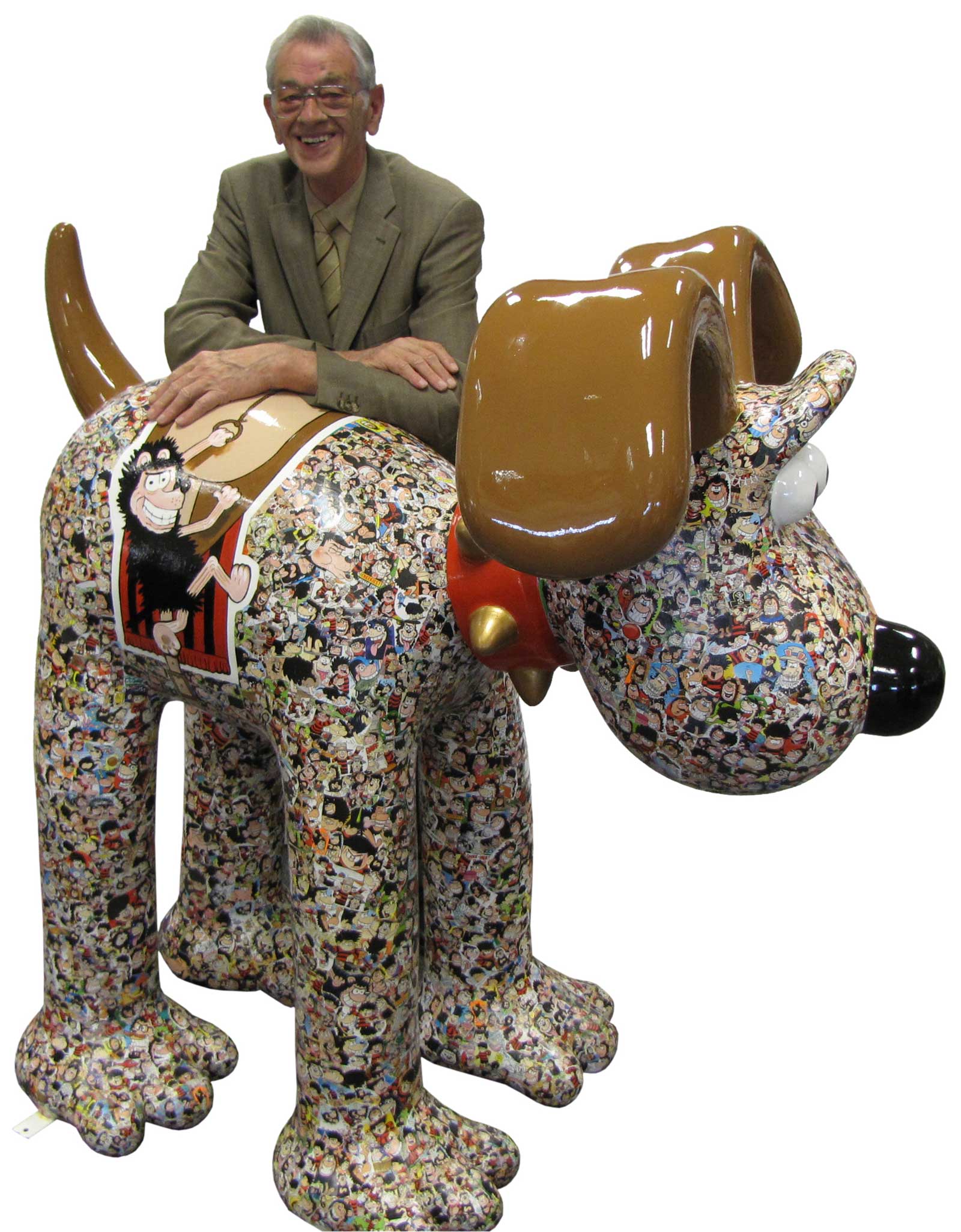 Extracts of original Beano artwork featuring Dennis and Gnasher have transformed a giant five foot high Gromit sculpture that will feature as part of a high profile public arts trail, hitting the streets of Bristol and beyond for ten weeks from Monday 1st July.

The Beano’s ‘Gnashional Gromit’ is one of 80 giant Gromit sculptures to be featured in the ground-breaking Gromit Unleashed event, organised by Aardman and the children’s hospital charity, Wallace & Gromit’s Grand Appeal. The cartoon design has been created by the team behind The Beano, led by Editor-in-Chief Mike Stirling and legendary artist David Sutherland.

David was the Dennis the Menace artist from 1969-1998 and it was he who gave Gnasher his trademark look. In his career, he has also drawn other legendary Beano characters, including Biffo the Bear and The Bash Street Kids, for whom he has now drawn a whopping 2180 weekly comic strips – a unique achievement in the cartoon world. He has also worked with all six editors of The Beano.

The Beano editor Craig Graham said: “The whole Beano team has had an absolute blast working with David on this project. David is truly one of The Beano greats and ‘Gnashional Gromit’ is testament to this. We hope the public enjoy our Gromit.”

Gromit’s creator Nick Park grew up an avid reader of The Beano and is a massive fan of David’s work, attributing him as a major influence at Aardman and an early inspiration for himself. At 10 years old, smitten by the characters in the comic, Nick Park started drawing his own cartoon strip, which led to the creation of Wallace & Gromit. 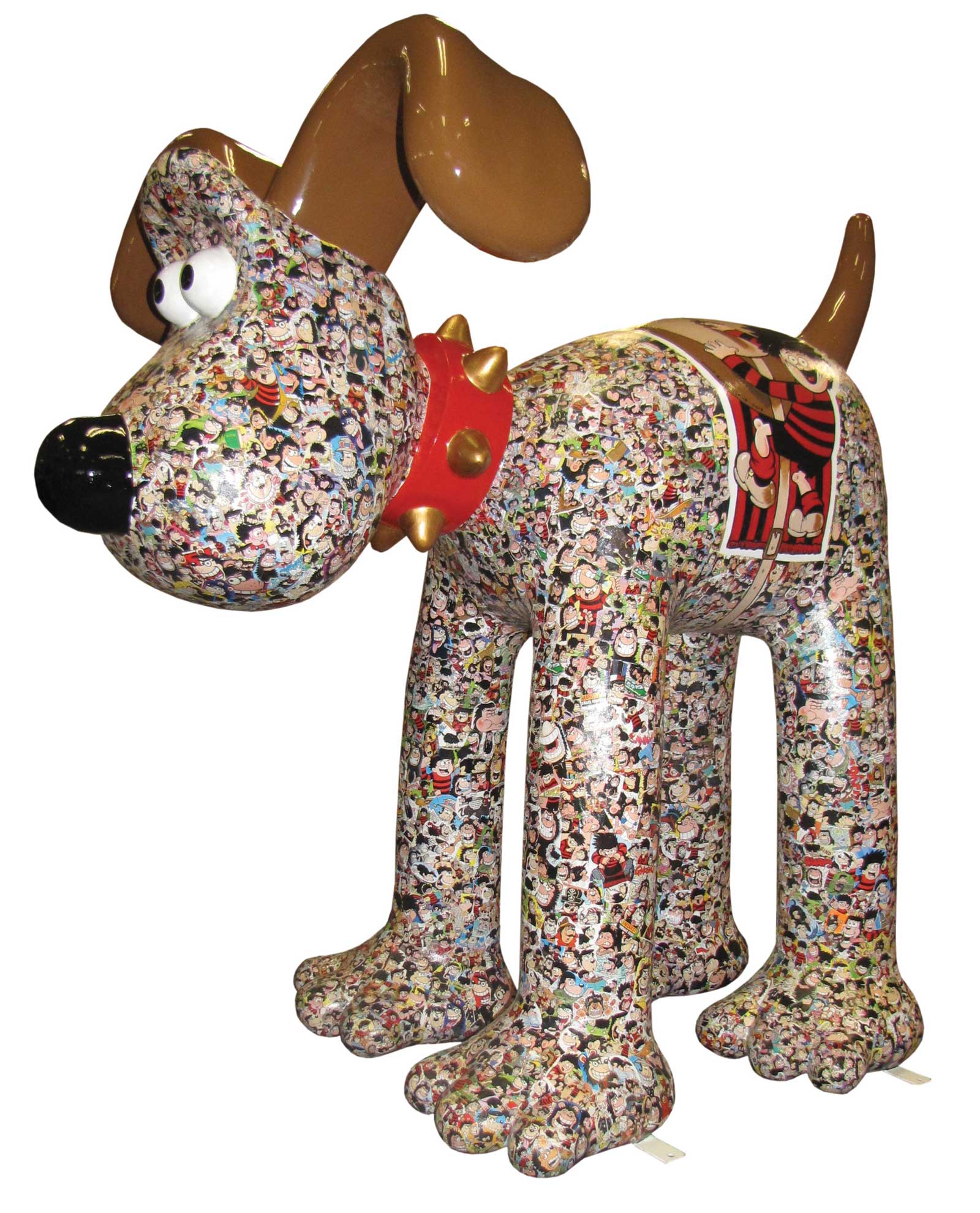 Nick Park said: “As a life-long fan of The Beano, I am thrilled that Gromit and Gnasher, two of the world’s most iconic canine characters, are getting together. To have Gromit receive a Gnasher makeover from the comic which inspired Gromit’s creation is pretty amazing!

“I am sure that Gnasher will get his teeth into the project in the nicest possible way and help raise lots of money for this fantastic cause!”

Nick Park guest-edited the 70th anniversary issue of The Beano, which this year celebrates 75 years in production.

Organisers will be revealing further famous names and unveiling more finished designs in the lead up to the public arts trail.

After the public arts trail, the Gromit Unleashed sculptures, which have been individually sponsored by businesses, will be auctioned to raise funds towards Wallace & Gromit’s Grand Appeal’s campaign to support the expansion of Bristol Children’s Hospital, one of the leading multi-disciplinary children’s hospitals in the UK. The Grand Appeal has pledged to raise an initial £3.5 million for state-of-the-art equipment, including an intraoperative MRI scanner, family facilities and child-friendly artwork to enhance the £30 million investment by the NHS.

The Grand Appeal is working with Wild in Art, a leading arts and education company that produces mass participation events in cities, to deliver Gromit Unleashed.

Wallace & Gromit’s Grand Appeal has already raised over £22 million for Bristol Children's Hospital, one of only a few specialist children's hospitals in the UK providing life-saving surgery, care and treatment to children on a local, national and international scale.

With the support of tourism agencies VisitEngland and Destination Bristol, Gromit Unleashed will help raise the profile of the city to tourists across the UK and beyond.

• For information on events and activities taking place in Bristol during Gromit Unleashed, plus details on accommodation options in the city, visit www.visitbristol.co.uk.
Posted by John Freeman at 12:03 pm