Don't Panic! It's All Change for Commando 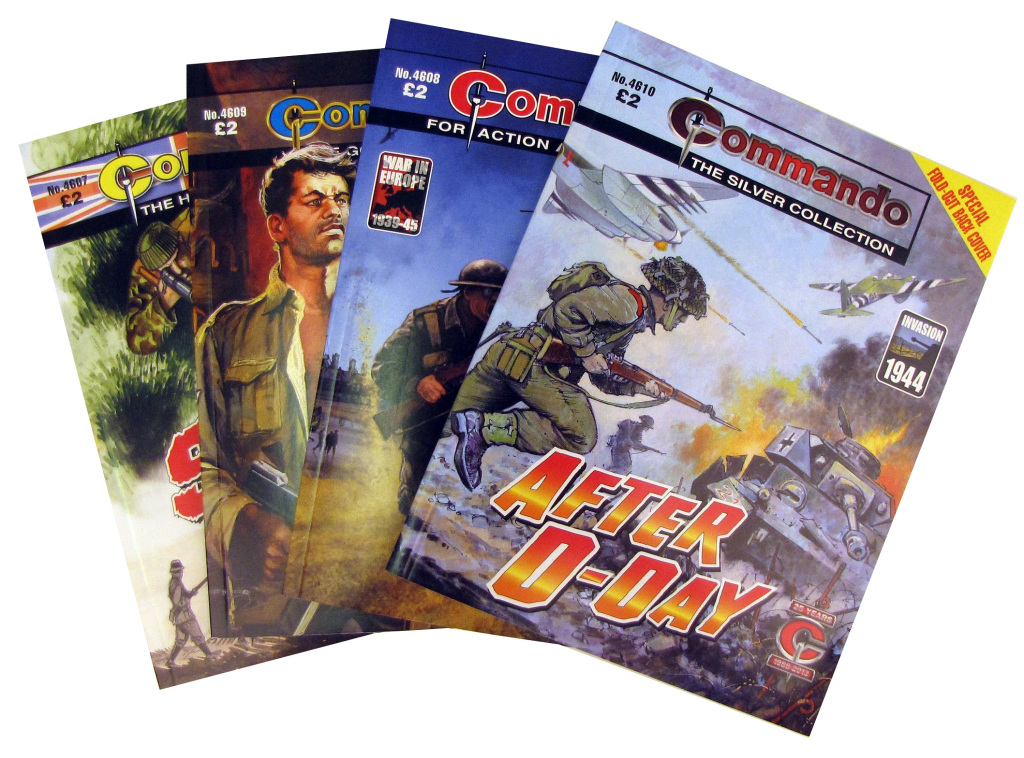 It's all change for Commando as DC Thomson unveil the first set to feature new-style gatefold-out covers.

"Over the last two years we've been listening to our readers’ thoughts about Commando and working to make the comic the best we can for them," explains Calum Laird. "We started the Gold and Silver Collections, digging deep into our archive for the very best classic stories — because they asked us to — and these have proved to be winners.

"We started our By Special Request series to give all readers, even lapsed ones, a chance to nominate titles they wanted to see again — because they asked us to. Judging by the number of requests we get every week, they like this idea.

"We moved to better, cleaner, heavier papers to show off our artwork better — because they asked us to. Okay, they take up more space on the bookshelf but that better quality is worth the extra footage.

"Now, we've managed to go a step further with the first major change to the Commando format since 1961.

The issues released this week (in the UK — sorry, overseas readers, you’ll have to wait a little longer) we’ve added a bit extra to the back covers so that we can display our cover art just as in left the illustrators’ drawing boards. No lettering, no badges, no Commando label. 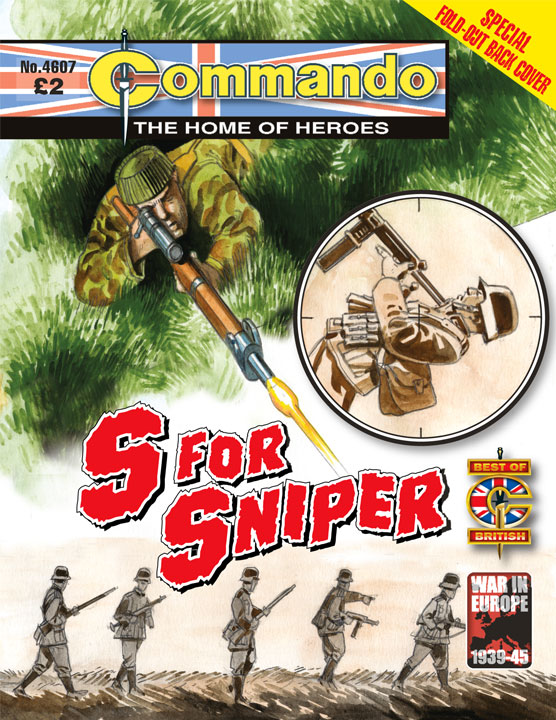 "Why? Because all the readers who have attended our recent exhibitions told us they really wanted to see it like that.

"There are more changes to come in the near future, ones that we know will go down well (because the readers have already told us that they will)," says Calum, "and that will give you more reasons to keep Commando at the top of your reading list."

For those concerned by any change, don't panic - Commando will be staying the same 68-page pocket-size helping of action and adventure. So prepare yourself to get down to the newsstand on the 6th June (Commando’s very own D-Day) and look out for the new issues with their yellow cover flashes... 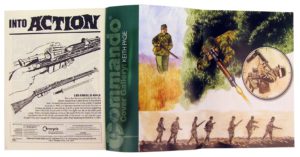 Commando 4607 - S For Sniper
Story: Mac MacDonald Art: Keith Page Cover: Keith Page
Sniper. The very word struck fear into the hearts of many an infantryman. The thought that a calculating killer could be lying in wait, hidden from view and able to snuff out a life with a single shot, kept men awake at night.

Corporal Alec Knight was a sniper, a man of few words and a crack shot. But was he a cold-hearted killing machine? Between these covers is his story. 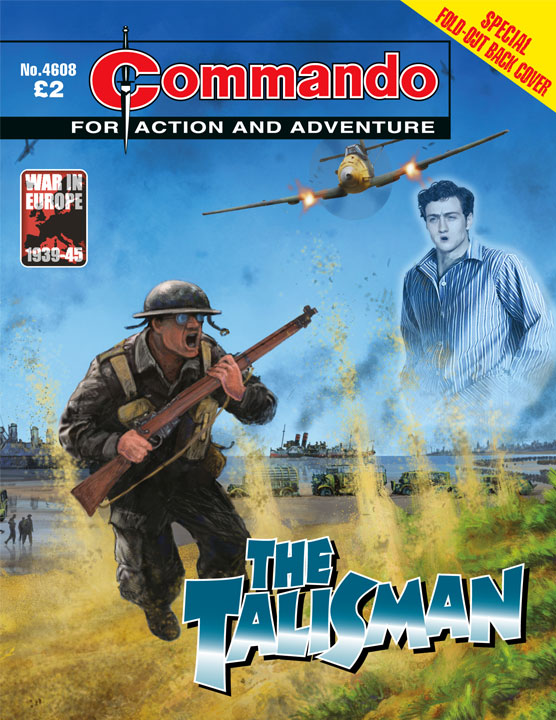 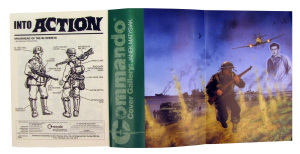 Private Bill Watkins was one of the men who survived the retreat to Dunkirk. He put it down to one unusual incident - the sight of a young French lad spurring him on to reach the safety of an escaping ship when he had all-but given up.

Bill decided this youngster was his “Talisman” - his lucky mascot. But was it wise for him to think that a lucky mascot could get him safely through the war? Probably not… especially when he joined the SAS! 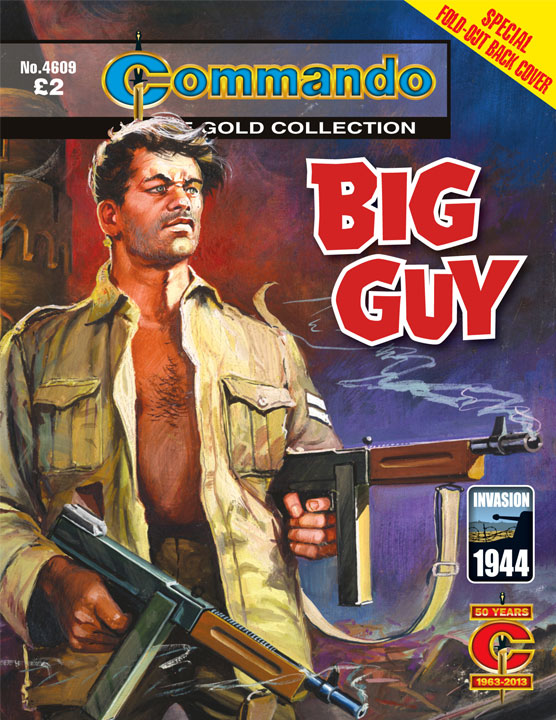 “Powerhouse” Jenkins was a born fighter. His only trouble was he didn't care who he fought. Germans and British alike crumpled before his massive fists, and this got him into a lot of hot water with the MPs.

When his regiment stormed up the French beaches on D-Day there was a song in Powerhouse's heart. For this was the biggest fight he'd ever been in and he was going to enjoy every minute of it.

But as things turned out Powerhouse was promoted to corporal for bravery on the field of battle. And according to his sergeant that meant he was a King's Corporal and couldn't be disciplined ever again…So it was that Powerhouse set out to enjoy himself in his own tough way. 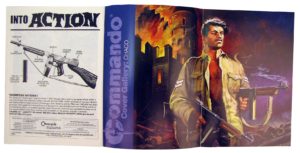 “The earliest Commando stories are peppered with two-fisted characters whose answer to every problem was to wade in with punches flying in all directions,” notes editor Calum Laird of this re-presented tale. “This story from Eric Hebden is no exception but there's a twist. A twist based around something only an old soldier would know about. A soldier like Major Hebden. His touch of authenticity lifts the story right up.

“He's ably abetted by Castro whose strong black and white work captures the action beautifully. And what about Chaco's cover? Would you mess with that man?

“All in all, a lovely little package from the 1963 Commando team.” 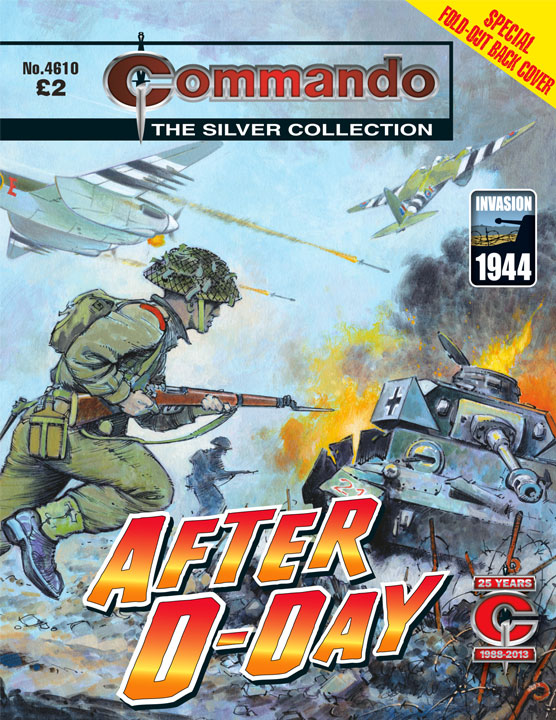 Sergeant Jack Potter had been in the war from the start. A brave bloke, full of courage and common sense. His men knew they could trust him to see them right as they pushed their way forward into France.

Then suddenly all that changed. Jack seemed to have something on his mind, something that was more important than anything else - the safety of a man who was no use to anybody! 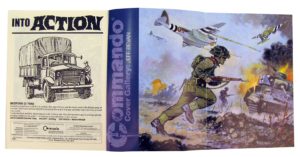 “Here's a solid tale of honour, betrayal and redemption from author Ken Gentry, illustrated to the usual high standard by one of Commando's most prolific interior artists -Gordon Livingstone,” enthuses Scott Montgomery. “As a young reader many years ago, I'd always admired Gordon's distinctive linework. Yet I never even knew his name until I joined the Commando staff decades later!

“Though retired, this superb artist still keeps in touch. When we opened the Gordon (what a coincidence!) Highlanders' wonderful Commando exhibition in summer 2012, Mr Livingstone was a guest of honour alongside fellow illustrator and good friend, Ian Kennedy.”

Follow this link to DC Thomson's subscription page.
When prompted, enter this unique code COMDT - then make your payment and your subscription will be up and running. The price quoted offers a 50% discount for three months at £12.50. That’s £68.50 off the shop price.

* Saving based on discounted Direct Debit price compared with shop price. First quarterly payment discounted by 50% at £12.50 and £25 per quarter thereafter. UK bank accounts only. One year discounted subscription rate of £99.
Posted by John Freeman at 2:26 pm