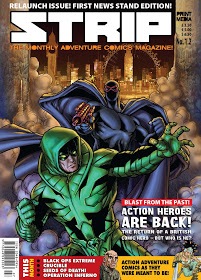 Print Media's STRIP: The Adventure Comics Magazine, an all-ages British adventure anthology comic, is now on sale in selected UK high street newsagents (and available to order from any newsagent).

The title will be on sale in UK comic shops from next week and is already available digitally for iPad.

The new comic – inspired by the great adventure comics of Britain’s comics past such as Eagle, Valiant and Lion - features some great art and stories from some brilliant creators including John McCrea (Hitman, The Boys), Smuzz (2000AD), John Freeman (Doctor Who), Milo Horvatic (Marvel) and Richmond Clements (Renegade) - plus comics news and interviews and other features.

The move to Britain’s high street is the latest stage of publisher Ivo Milicevic's desire to bring the anthology to a wider audience in the UK, in addition to its continued sale in comic shops and as a digital edition for iPad, in association with ROK Comics.

Headed up by long time comic creator Ivo Milicevic, Bosnian-based comics publisher Print Media began the long road to bringing a British version of their action adventure anthology to the UK back in February 2010, after their re-publication of Dan Dare from the 1950s comic Eagle drew the attention of comics fans.

Mr Milicevic began to investigate the possibility of bring his STRIP brand to the UK, horrified to discover the British comic characters he had grown up reading such as Steel Claw, the Spider and Black Archer were nothing but distant memory. Although these incredible heroes had been re-published in the former Yugoslavia and indelibly helped shape his life-long love of comics, the British titles that spawned them - weekly comics like Lion and Valiant - were long gone from the news stand, replaced largely with licensed fare and more magazine-based titles for teenagers.

Unimpressed, he decided to take the plunge and trial a new action adventure anthology through UK comic shops. The first volume of STRIP was intended to road test the title and story ideas - and iron out any issues arising from its long distance publishing.

Although Mr Milicevic freely admits the journey has not been easy at times, with the support of some of Britain's best and brightest comic creators those first seven issues got the positive reaction he was hoping for. The response made him all the more determined to join the likes of 2000AD, Commando and The Beano in WH Smiths and other select newsagents.

Offering a mix of action adventure, science fiction and fantasy strips, stories in the pipeline include Dragonrir, a stunning fantasy tale by Miljenko Horvatic and Damir Zitko; a thrilling story of the criminal underworld, Deliverer, by Miljenko Horvatic, drawn by Bernard Kolle; WarWorldz by Stephen Walsh and Giancarlo Caracuzzo; the tale of an ancient warrior battling magic, Thracius, by James Hudnall and Mark Vigoroux; plus the return of other strips, including Age of Heroes by James Hudnall and John Ridgway and The Devil’s Heritage by Jerome Felix and Paul Gastine.

"I am really excited our plans for STRIP Magazine are finally developing as I planned three years ago" says publisher Ivo Milicevic. "There is no certain formula for success, but the Magazine will have some good stories and really great art."

• List of stockists: http://stripcomicmagazineuk.blogspot.co.uk/2013/04/strip-magazine-1-wh-smiths-store-list.html
Please note you can order STRIP from any newsagent. STRIP is distributed by Warners

• KING COBRA (written by John Freeman, art by Wamberto Nicomedes) A classic British hero resurfaces when the Bank of England is robbed!

• WARPAINT (by Phil Hester and John McCrea) Re-told from the very beginning - one teenager's deadly battle with ancient forces!

• CRUCIBLE (by John Freeman and Smuzz) A deadly task for a mis-matched team of adventurers - in a world where not everything is as it seems!

• DENIZENS (by Miljenko Horvatic and Maxim Simic) Modern civilization has been wiped out and the world is a greener, deadlier place...