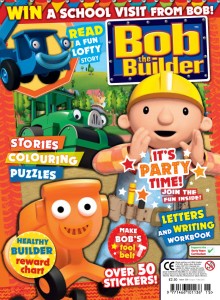 Bob the Builder magazine, published by Immediate Media, is celebrating its 200th issue with the launch of a national competition to win a visit from Bob the Builder at your child’s nursery or school.

Bob the Builder is a four-weekly title pre-school magazine launched in November 2000 and is now published by Immediate Media Company on behalf of rights-owner HIT Entertainment. It has a circulation of 35,027 (ABC circulation figures July-Dec 2012).

The magazine is published under licence from BBC Worldwide.

The 200th issue of Bob the Builder magazine is packed with lots of activities to keep little builders busy. Readers can share two fun stories and do some pencil practice in a writing and letters workbook. The magazine comes with a sticker sheet to make a party scene for Bob’s crew and a healthy eating reward chart. Young readers can also make a tool belt just like Bob’s – there’s even a pocket for their free phone and keys that come with the issue.

“We're excited to celebrate the enduring popularity of Bob the Builder’s world with a magazine which allows fans to join Bob’s busy team," enthuses Andrea Turton, the title's editor. " It’s a great way to give something back to our readers with such a fantastic competition which we know will delight little fans.”

• The 200th issue of Bob the Builder magazine is now on sale in newsagents and supermarkets, priced £2.50.