Dan McDaid on board for Dark Horse 'Catalyst Comics' project 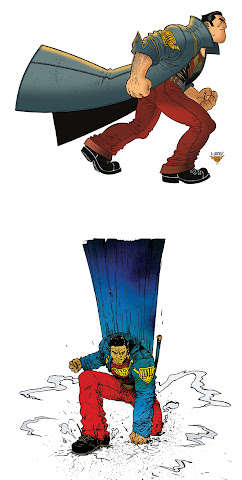 
The creative team of Joe Casey and artists Dan McDaid, Ulises Farinas, and Paul Maybury will be turning the superhero genre inside out with a completely original take on capes, tights, and superpowers in the series.

Man of action Joe Casey reimagines powerhouse Titan, guardian angel Amazing Grace, and the subversive Agents of Change in three mind-blowing, intertwining stories. Superhero comics get a back-alley facelift as these very different champions confront a cosmic threat and personal demons -- and where better to start than the end of the world!

“With this book, we’re taking the kinds of creative chances that other corporate superhero series wouldn’t even think about,” said writer Joe Casey. “This thing looks great, it feels great, and it’s the kind of comic book that makes life worth living!”

“Joe and his team have created a very unique comic, existing quite far apart from your traditional Marvel and DC titles,” said Dark Horse President Mike Richardson. “I might even venture to call it the first postmodern superhero series.”

One of the most exciting and groundbreaking new series in Dark Horse’s superhero initiative, Catalyst Comix promises an inspired take on the capes-and-tights genre, with wraparound series covers from Rafael Grampá, Paul Pope, and Brendan McCarthy.

Look for the first issue in your local comic shop on 3rd July 2013.