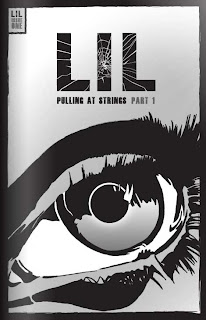 Michael Young and Marc Crane, a creative team from Billericay in Essex, have just released a collection of their comic LIL, which they've been publishing online for quite a while.

LIL is a gritty, noir-based comic series set in a fictional state somewhere along the gulf of Mexico. The story unfolds through the eyes of an edgy female prognostic, who is down on her luck when she happens upon mysterious bag.
"We've produced five issues at present and we're now working on Issue six," Michael tells us. "You can read the full comic so far on our website (www.lilcomic.co.uk).

"We've recently produced a print collection of all five issues, which is currently selling in the Leicester square comic shop: Orbital, as well as on our website."

The first five issues are an intriguing read, although each issue is quite short - perfect, I think, for web reading (although the actual presentation using snacktools platform, is a little awkward). While the content is adult and not for younger readers the design of the comic is strong and the artwork eye-catching, if raw. There's also an unsettling edge to the story as Lil's life starts to spiral downwards after she looks in that mysterious bag...

"We've recently received some amazing support and praise locally," reveals Michael, "and  reviews and interviews internationally on an American podcast show, Pod Magnetic. We've featured in a nationwide online magazine and been favourably reviewed by a well respected blogger with in the noir genre.

"We're hoping to making LIL into a long running series."