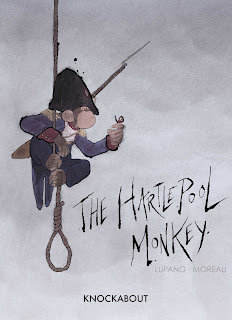 Knockabout will be publishing an English language edition of Wilfrid Lupano and Jérémie Moreau's Le Singe de Hartlepool in September, telling the story of the legendary Hartlepool monkey, allegedly hung by townsfolk fearing it was a French spy during the Napoleonic wars.

Published in French by Delcort, Le Singe de Hartlepool (available in French from amazon.co.uk) is the first collaboration Lupano and Moreau and had a high profile during this year's Angouleme Festival.

"The story of the monkey hung by the citizens of Hartlepool as a French spy in the Napoleonic Wars is well known," notes one of Knockabout's regular contributors, Hunt Emerson, who drew our attention to the story. "The comic book tells it with graphic brilliance and humour." 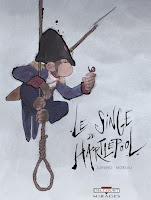 bdgest (in French) notes its writer, Wilfrid Lupano, overheard the story in a Manchester pub and has turned the anecdote into a fabulous comic, with the monkey's story becoming a universal tale denouncing the narrow-mindedness and stupidity. While the story is funny on the surface, there's a darkness to the underlying theme.

According to local Hartlepool folklore, during the Napoleonic wars a French ship was wrecked off the coast of Hartlepool. The only survivor was a monkey, allegedly wearing a French uniform to provide amusement for the crew. On finding it, some locals decided to hold an impromptu trial in the town square; since the monkey was unable to answer their questions, and many locals were unaware of what a Frenchman may look like, they concluded that the monkey was in fact a French sailor.

Just to make sure, the animal was thus sentenced to death and hanged in the town square on the Headland.

"Moreau perfectly captures the essence of the scenario," notes bdgest of the detailed artwork, "a mix of farce and drama in which good laugh turns into a bitter sneer from one box to another." (You can view some pages from the album here)

Le Singe de Hartlepool  has already drawn the attention of Hartlepool residents. “I had a good read of it and it’s a really good laugh," says Hartlepool restaurateur Krimo Bouabda, who received a copy from his friend Didier Deville, who was also a well-known chef and restaurateur in the town from 1986.

“The pictures are amazing," he told the Hartlepool Mail. "You can see the Headland, the Fish Sands, the Town Wall and St Hilda’s Church, it’s a beautifully-drawn cartoon.

“The whole thing is really funny, it makes the French monkey out as the victim,” said Krimo. “I do hope they use a bit of the Hartlepool lingo when it gets translated."

Jeremie Moreau apparently plans to pay a visit to Hartlepool on the book's release. Let's hope he gets a better reception than the monkey did!

• View a preview (in French): www.bdgest.com/preview-1121-BD-singe-de-hartlepool-le-recit-complet.html

• Here's a video (in French) of Le Singe de Hartlepool's promotion at Angouleme.