Unabashed Self (and Smuzz) Promotion: Crucible debuts at last 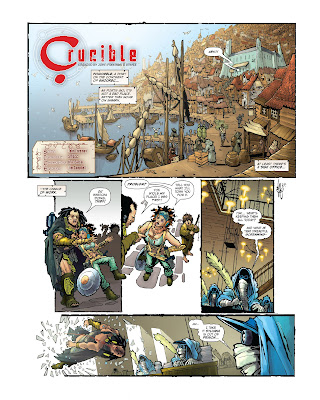 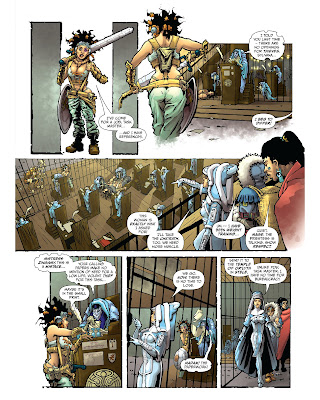 Here are two pages of the the first episode of Crucible, which features in the relaunched STRIP Magazine #1, out this week. The strip is written by me, with art by Smuzz, colour by Kris Carter, lettered by the wonderful Jim Campbell.

As some long-suffering readers of this blog know, the story is based on a concept I’ve had in my head for years but I never wanted it to be sold to a company and Smuzz was the artist most connected with it down the years. (We almost got it picked up by Marvel’s Epic brand, thanks to Dan Chichester, just to give you an idea of how long this one has been in the works! Grateful thanks to everyone who has supported this project along the way, especially Smuzz.

This is one of the mag’s creator owned strips, which also included Phil Hester and John McCrea’s Warpaint on that front.

The print version of the Magazine should be on sale from today (Thursday) in selected WH Smiths although getting a straight answer out of them as to the exact release date has been a struggle, causing a bit of disappointment for the title's (currently) small but fervent fan base: it will certainly will be be on sale, I’m told, in the London area today with full roll out tomorrow.

There’s a full list of WH Smiths that will be stocking it on the STRIP blog (http://stripcomicmagazineuk.blogspot.co.uk/2013/04/strip-magazine-1-wh-smiths-store-list.html).

It’s also available to order from any WH Smiths or newsagent in the UK, heading for UK comic ships via Diamond and you can definitely buy it for iPad now (https://itunes.apple.com/app/strip-magazine-2.1/id619259147.
Posted by John Freeman at 10:16 am