In Review: Classics from the Comics Issue 173 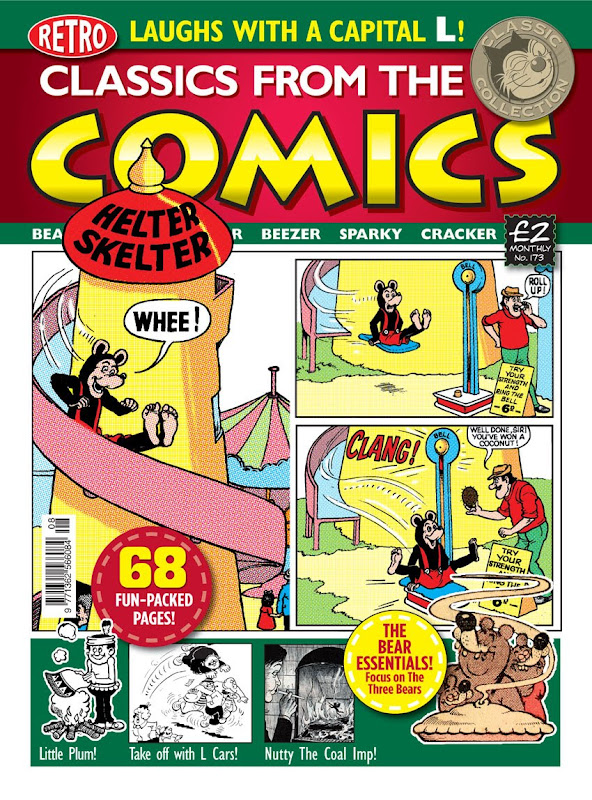 The latest issue of DC Thomson's 'Retro' title, Classics from the Comics is on sale now in all good newsagents, offering another fine medley of humour and adventure strips from a variety of the publishers' current and past titles, including The Beano, The Dandy, Topper and Sparky.

There's a fun Biffo the Bear strip on the cover (which ace comics historian and cartoonist Lew Stringer tells us is by Dudley Watkins from an early 1960's Beano), but that's just one of many cracking strips, which include a fine Desperate Dan tale from 1965 on the inside cover; an ace episode of Ken Reid's Jonah, the hapless sailor; a 1963 episode of Foxy from Topper, a not-very-bright predator who must surely have been inspired by Warner Bros. Sylvester the Cat; and a spotlight section on the Beano's ever-hungry Three Bears, with reprints of some of their earliest appearances, including their first, drawn by Leo Baxendale, published back in June 1959.

Considering the longevity of The Three Bears, it was a surprise to learn that the strip originally ran for just four weeks, and was eventually brought back after positive reader feedback, but not until October 1960. The examples selected, which include strips by Bob McGrath and Bob Dewar, are well chosen and show how the simplest of concepts can have enduring appeal.

With a selection of adventure strips (the last episode of a General Jumbo story from Buddy, Space Kids from Beezer, drawn by Ron Smith), a 1953 text story (Nutty the Coal Imp from the Beano), another 'My Home Town' spotlight (Newport) and episodes of Bananaman, Colonel Blink, Superwitch, Corporal Clott and Dennis the Menace (to name but a few), this issue of Classics is another fine collection of archive material.

Of course, the greedy among us still want more: Sparky's I-Spy, for a start, and some more adventure material. But with so much material to choose from, it's great to see such a well put together 'retro' title on the news stands - and I'm amazed Egmont isn't doing something similar, beyond the limited WH Smith-only specials it put out last year.