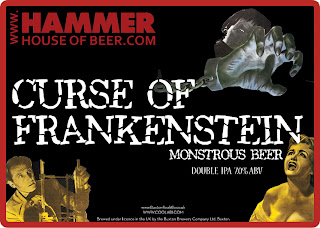 Hammer Films have promoted themselves in some pretty inventive ways over the years with DVDs, a board game, T-shirts, mugs and poster based on the famous horror films.

Now we can look forward to three new Hammer Beers which look set to go down a storm in the bar at horror conventions!

The Buxton Brewery Company Ltd is to produce three Hammer-themed beers - Coffin Ale, Dracula's Desire and Curse of Frankenstein which will be available as bottles and on draft from September. The bottle labels and beer pump clips will be illustrated with classic poster images from the Hammer archives.

If you can't find them in pubs or shops, you'll be able to order them online. Check out the official website for details.

Talking of Hammer, Titan Books are releasing The Art of Hammer, the first ever collection of the company's iconic film posters in book form, compiled by Marcus Hearn, in October.

Hammer Films were almost as well known for the way in which they sold their films, as for the films themselves. The Art of Hammer is a celebration of movie art at its best - a large format, lavish hardback bringing together hundreds of rare posters from around the world, and features Hammer's greatest films.
Posted by Ian Wheeler at 10:47 pm

I'll drink to that!