Bellamy, Beano and Buster comic art up for grabs in latest ComPal auction 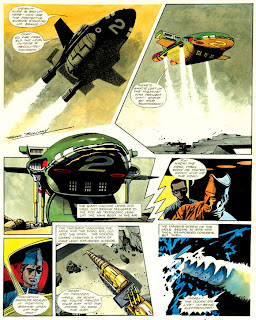 The Autumn 2010 auction at British comics auction site Compalcomics has just opened, with 315 lots in the catalogue including a magnificent Beano front cover artwork drawn by Dudley Watkins and some rare Thunderbirds artwork from TV Century 21 by Frank Bellamy.

The signed Bellamy art - which appeared in Issue 220 of the classic 1960s comic and is expected to sell for over £700 - shows Thunderbird 2 landing near Project City where the Mole tunnelling vehicle is deployed to bore through the concrete walls with Virgil and Brains at the controls.

But the walls are live - and they’re being electrocuted... 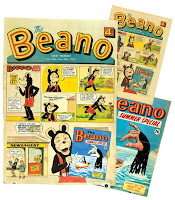 ComPal say they have auctioned only three Beano cover artworks in the last twelve years and the art is expected to sell for over £200.

Another rarity on offer is at lot 10 where six of Mrs Hippo's Annuals reside, including the first from 1926. Starring the female versions of Tiger Tim and The Bruin Boys, Mrs Hippo, Tiger Tilly and the girls never made it in to comic form, just these annuals published between 1927 and 1935, which are in nice condition.

Tiger Tim is also represented with his own Bruin Boys' Bagatelle Game, a rare survivor from the 1920s and in full playable order at lot 42. Beano, Dandy and Magic early issues published by DC Thomson are in evidence from 1938 and 1939 - including The Dandy's first April Fool (Issue 18) and Christmas numbers.

The 1960s are represented by a near complete run of Hurricane in five lots (one containing a flyer for No 1 of The Big One), Commando, Battle Picture Library and various lots of Lady Penelope - including Issue 1. 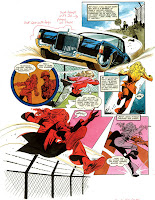 In addition to the Bellamy art, there's also more comic work on offer including Look and Learn pages by Ron Embleton, Battlestar Galactica art from Look-In by Martin Asbury, a page of Frankie Stein by Ken Reid (and some of his great World Wide Weirdness pages from Whoopee), s1977 Bionic Woman art by John M. Burns for Look-In, Buster original front cover artworks from the 1980s by Reg Parlett, plus pages of The Broons and Oor Wullie by Dudley Watkins - the latter a regular staple of these fantastic ComPal auctions. 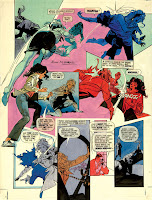 The auction's US section profiles The Batman #12 (1942), Fantastic Four #1 with CGC late 50s issues of Detective, Lois Lane and Batman and along with our usual runs of 1960s Marvel and DC titles, there's some high grade horror from the 1970s and four original artwork pages drawn and signed by Sal Buscema.

• Bids will be accepted until Tuesday 7th September at 8 PM UK time. To go directly to the main page for the catalogue, click here
Posted by John Freeman at 11:00 am