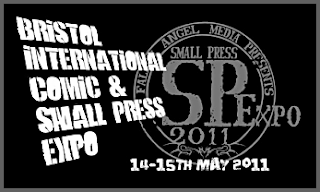 Next year's Bristol International Comic and Small Press Expo will be on Saturday 14th and Sunday 15th May 2011. With 3 extra exhibitor and trading spaces and 8 extra event areas this is now the largest independent and small press show in the UK.

Visitor numbers at the Small Press Expo in 2010 were double that of 2009 and the Team SPExpo organisers aim to double them again for 2011. The full website with guest and event details will go live on 21 August 2010 but in the meantime venue and dealer table booking details are already available.

In addition to Bristol, Team SPExpo have filled the hole in the events calendar left by the demise of the UK Web And Mini Comix Thing in London and have organised the new London Comic And Small Press Expo which will be held on 12 March 2011. More details on this new event covering indie, small press and web comix, including its venue, have yet to be announced but will be available on the website on 21 August 2010.