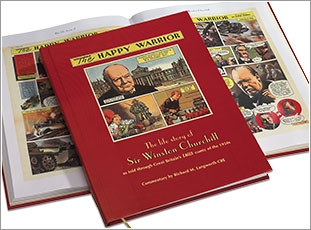 (with thanks to Dave Wilson and Norman Boyd): Some web trawling by Eagle comic fans has thrown up the find of new collection of Frank Bellamy's world-famous strip Winston Churchill: The Happy Warrior.

The collection is only available from the US Publisher Levenger Press' web site and is not cheap at $39 a copy, but the new edition was welcomed by Churchill's great grandson, Jack, one of the team working on winstonchurchillshop.com

The edition - available in hardcover, which we believe was published sometime last year - collects all 50 weekly installments of The Happy Warrior as they appeared between 4th October 1957 and 6th September 1958, along with commentary by Richard Langworth, the Churchill Centre historian, offering added background and context.

"The Happy Warrior is history," says Jack Churchill of the book, "but hopefully reading about the adventures that Winston Churchill got up to in his 90 years will inspire others to experience their own exciting stories and write about them.

Drawn by Frank Bellamy, The Happy Warrior told Churchill's life story when the wartime Prime Minister was still alive and is regarded by many as the strip which established Bellamy's name as an artist of note. "His thorough research of actual military ephemera and the beginnings of his attempts to improve the dynamic composition of the page layouts are clearly in evidence throughout the story," notes Bellamy fan Chris Bishop.

The Happy Warrior has reprinted before, first by Eagle publishers Hulton Press themselves in 1958 and by Dragon's Dream in 1981. It has also been published in Dutch. Full details here on the Frank Bellamy checklist site)

Established in 1987 by Steve and Lori Granger Leveen and based in Florida, Levenger, which describes itself as the publisher of "uncommon titles", has retail outlets in Boca Raton, Boston, Chicago and the Washington, D.C as well as offering its catalogue online.

• Levenger Press Home Page
Posted by John Freeman at 10:00 am