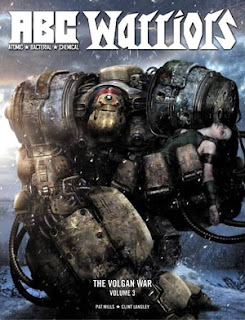 Pat Mills is one of the founding fathers of 2000AD, while artist Clint Langley images can be seen worldwide in comics, on novel covers and in the conceptual design for advertising and films.

Langley's first comic strip work was Dynosty, which appeared in 2000AD. He’s since worked on various comic strips such as Slaine, Judge Dredd and Warhammer.

The latest ABC Warriors collection begins as the countdown to Zippo’s execution continues...only the Warriors can stop their comrade from being melted down by the ruthless G Men.

If that wasn’t bad enough, the Warriors are also set to be betrayed by another member willing to follow Volkhan and his destructive cause. And just who is the mysterious resistance figure known as the ‘Urban Fox’?


• The Forbidden Planet Megastore is at 179 Shaftesbury Avenue, London, WC2H 8JR. For more news about their signings visit: www.forbiddenplanet.com/events