Phoenix to rise from Insomnia's ashes 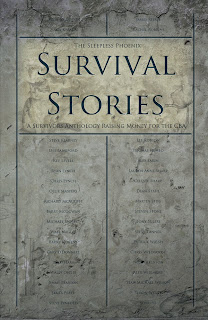 The collective was born out of the seeming (and abrupt) end to Insomnia earlier this year. On 30th June, Insomnia publisher Crawford Coutts filed to cease trading with the UK Companies House. Coutts never officially informed his creators and, until last week, had remained out of contact.

(On Friday, Coutts sent out an e-mail releasing creators from their Insomnia contracts. Previously, downthetubes understands that anyone who'd signed a contract was still tied to Insomnia due its status as "inactive" rather than insolvent, and couldn't take their books elsewhere unless the company was formally wound up, or the contracts were officially cancelled. Now that the latter has happened, people can go looking for new publishers).

Rather than allow their work to fall to the wayside,  creators banded together, fast building a mutual admiration for the short comics that will appear in this anthology - and everyone involved is determined to see it get the release it deserves, with the project's Kickstarter appeal pegged at £2320 ($3600) to pay for printing.

Supporters can pledge as little as one dollar to the cause to help get the book printed, although those that pledge more will be entitled to perks such as a limited edition print along with their copy, or an original sketch from one of the artists.

Mike Carey (The Unwritten, Lucifer) has called the book "a kaleidoscope of graphic stories--mostly in the darker colours of the horror palette, but all the better for that".

In addition to selling signed limited-edition softcover editions of the anthology, The Sleepless Phoenix is offering several unique opportunities for donors to snag original art, have their likeness illustrated in the book, and be acknowledged in a special thank you section.

Money raised from anthology pre-sales will pay for the printing and shipping of the anthology. All profit will go to providing funding for the Comic Book Alliance, an organization that works to settle creator disputes in the comic publishing industry.

• Visit the Sleepless Phoenix page on Kickstarter for all the latest news, previews, and updates
Posted by John Freeman at 10:00 am