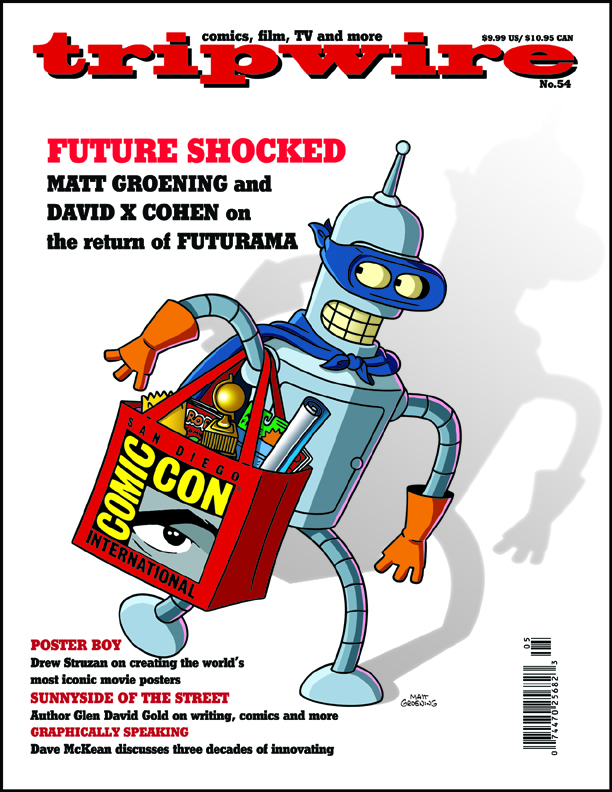 Ace media magazine Tripwire is back with another info-packed issue! The Eagle Award-nominated British-American magazine about comics and genre culture returns this July bringing even more of the quality features you’d expect from their previous issues.

Beneath an exclusive Futurama cover featuring everyone’s favorite robot Bender, they chat to Matt Groening and David X Cohen about plans for their new run of the animated sci fi series on Comedy Central, and go behind the scenes at the Henson Company.

Movie fans are sure to enjoy an interview with veteran movie poster artist Drew Struzan, revealing all about his work on the most iconic movie images in the history of cinema and why he's decided to move on to do more personal work. The magazine also probes the special effects of megahit Iron Man 2 with SFX house Double Negative.

Author Glen David Gold talks about his novels in an exclusive interview and fantasy grand master Michael Moorcock offers a glimpse into his early career and growing up in post-War London.

Finally, there's comics: Dave McKean discusses three decades creating his own niche as an artist, illustrator and director; J. Michael Straczynski and Paul Cornell talk about their takes on Superman, Wonder Woman and Lex Luthor respectively; Mark Schultz discusses bringing his Xenozoic Tales back into print; and the magazine also covers the various anniversaries of Captain America and DC Comics and talk to Titmouse about their new magazine and book. Last, but by means least, there's a giant helping of original strips from some of the usual suspects like Roger Langridge and Kev Mullins.

• Tripwire #54 ships the last week of July and comes in at 124 pages with a new lower price of £6.95 UK, $9.99 US and $10.95 Canadian. It's available from Barnes & Noble and Borders in the US, Chapters and Indigo in Canada and via Diamond UK and Forbidden Planet and Forbidden Planet International in Britain as well as selected West End and West London newsagents and the Gosh and Orbital comic stores in London. You can order it directly from: www.tripwire-magazine.com
Posted by John Freeman at 10:54 am