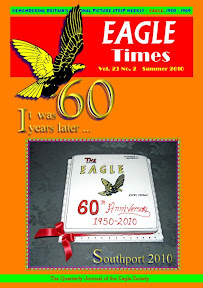 The latest issue of Eagle Times, Volume 23 Number 2, Summer 2010, is on sale now from the Eagle Society, with highlights that include a photo-illustrated report on the Society's April 2010 gathering 'to celebrate Eagle's 60th Anniversary in Southport and a look at the ways in which alien languages were treated in the Eagle's 'Dan Dare' saga.

Also included are features on Space Captain Jim Stalwart by downthetubes contributor Jeremy Briggs - story synopses and foreign reprints, including in Spain's Futuro, of this 'forgotten' strip from 1954 drawn by Dan Dare artist Bruce Cornwell for Junior Mirror, a look at some of artist Ron Embleton's lesser known work, a review of some of the 'Authentic Plastic Assembly Kits' made by Eagle/Wall Plastics Ltd in the 1950s, plus recollections of the origins and activities of the Astral Group 'Dan Dare' Club in the 1970s.

The cover illustration for Eagle Times shows the celebratory Birthday Cake which was cut and consumed by members of the Eagle Society at the Southport event on 14th April 2010 - the 60th Anniversary of Eagle's first publication.

• Full contents list on the Eagle Times blog
Posted by John Freeman at 12:27 am