Now in its fourth year, the Dundee Comics Day treads the fine line between the accessibility of a public lit fest, as it is part of the Dundee Literary Festival, and the sensibilities of an academic conference since it is located in Dundee university and run by academics. This year it hit the balance perfectly.

Run by Dr Chris Murray of the University's Humanities department, each Comics Day has a theme and this year's was Creating Comics, from writing and illustrating, via editing and designing, through to publishing. As well as organising the Comics Day, Chris is co-editor, along with Julia Round of Bournemouth University, of the new academic journal Studies In Comics and free copies of the first issue of this 186 page, oversized A5, landscape magazine were available to those attendees who were interested. The first issue is also available free online from its publishers, Intellect Books. Those of us who have been to many of Chris' events in the past are aware of his line in sartorial elegance and this year he didn't disappoint with a day-glo green tie against a red shirt. 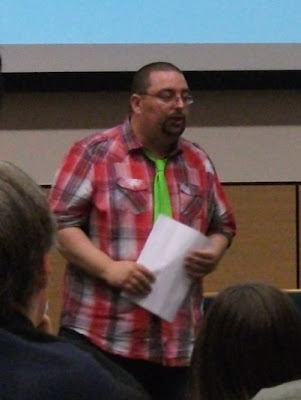 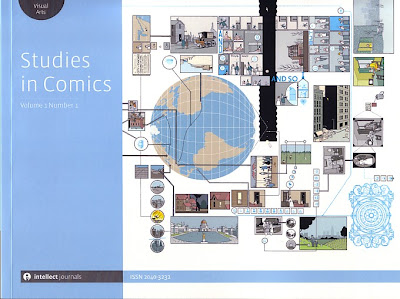 The day began at 11am in the university's spacious and well equipped D'Arcy Thompson Lecture Theatre with a one hour workshop on drawing manga run by Manga Shakespeare artist Nana Li who went on to join the signing sessions later on in the afternoon. Dundee University runs a popular annual manga/anime convention called D-Con so it was surprising that this manga workshop wasn't better attended but then the Dundee Comics Day is normally a small, intimate affair and it would perhaps lose some of its friendliness if it had a much bigger turnout. 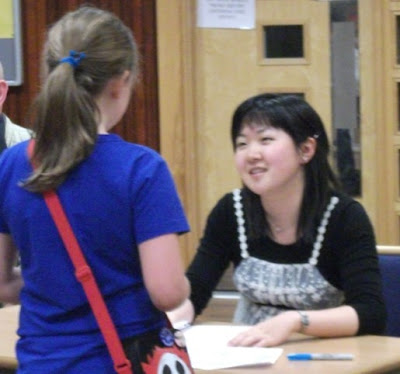 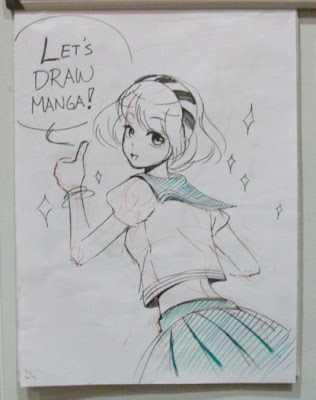 As well as the friendliness, the other plus point for Dundee is that the cost for the entire day was £10, which included an ongoing supply of refreshments. While this is a fairly standard price for a single day at a comics convention, for a literary festival it is a bargain. The Edinburgh International Book Festival this year would charge £54 plus booking fees for five guest talks and an art workshop, with refreshments extra and the guests escorted to and from their talks leaving the only chance to talk to them being at any post talk signing sessions. Things are rather different in Dundee.

The main afternoon session began with artist and designer Rian Hughes. While Rian has various comic strips to his credit, including Grant Morrison's Dare, 2000AD's Robo-Hunter and The Science Service by downthetubes' own John Freeman, he spends most of his time as a graphic designer so his talk had the potential to be perhaps the least interesting of the day. However as he took us through the type of work he does, including advertising posters for The Body Shop, point of sale illustrations for Clark's Shoes, designs for Swatch Watches, and a multitude of book illustrations including those for Geri Halliwell's children's books, his ability to articulate his design choices and his enthusiasm for what he does shone through and made for a very interesting talk. 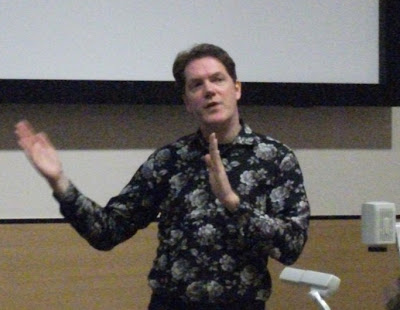 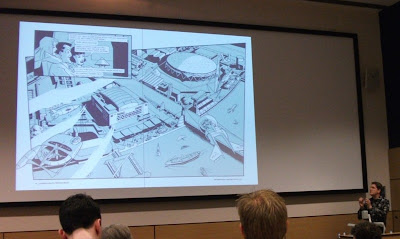 Marvelman and Excalibur artist Alan Davis was next with a heavily illustrated talk on how he creates a page of comic art from the initial thumb nail sketches, through pencilling and inking to the final coloured product. He explained how he saw some pages as being 'silent' despite them having text boxes and speech balloons because the artwork was enough to explain the story of the page, compared to those pages that needed the text for the reader to understand what was happening. As a superhero artist he explained why he believed in "swoosh" lines to indicate movement and how they could be incorporated without being overly distracting by drawing the character's anatomy around the movement lines. Since Alan chose to sit at the lecturers desk at the front of the large lecture theatre there was no distraction of him walking around as he presented page after page of his superb art to the rapt audience and I'm sure that I wasn't the only one with a pang of disappointment when he announced that he had reached his final page. Questions for Alan followed before a break during which there was a signing session in the Tower Building's reception area by Rian and Alan. 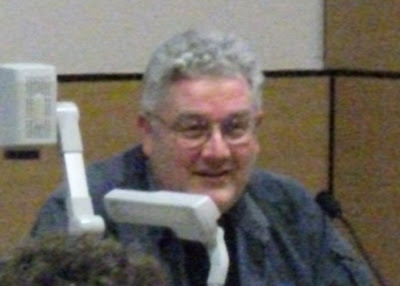 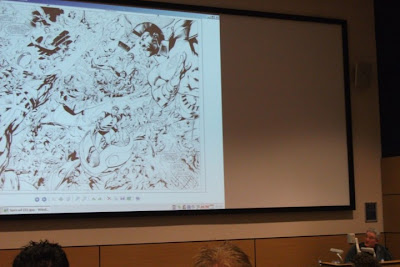 Also in the reception area, along with sales tables from the local comics shop, Black Hole, and local comics merchandiser, Fine and Dandy, was an exhibition of the late Willie Richie's work. Sadly this DC Thomson artist, who was a great comics fan and collector, passed away earlier this year and the exhibition showed the range of his talent using original artwork from the DC Thomson archives. This ranged from his minimalist art for Baby Crockett to the rather more detailed art for Simple Spyman, both from Beezer, as well as covers for Sparky, designed to be coloured as part of the production process, and full colour pages from the nursery comic Bimbo. This free exhibition will remain open until 21 August 2010.

After the refreshment and signing break, former DC Thomson editor Bill Graham gave a talk on Willie's work for DC Thomson concentrating on the work that both men had done for what Thomson's refer to as "Pony Stories", the comic strips they produce for the European Egmont comic Wendy. This explained one of the pages in the exhibition which no one seemed to recognise, a humorous horse strip called Snooty and Scamp. This was created for Wendy with Bill writing and Willie illustrating some 800 pages of the strip over the years which was then translated into German and Swedish amongst other languages. The exhibition, along with Bill's fond memories and amusing anecdotes, were a fitting tribute to his friend and colleague. 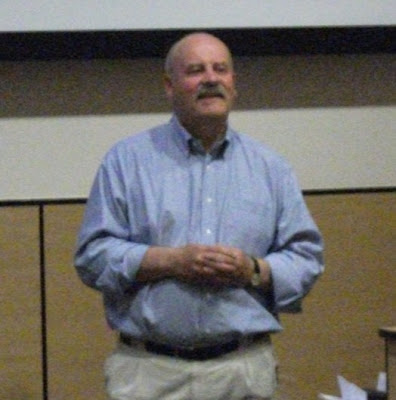 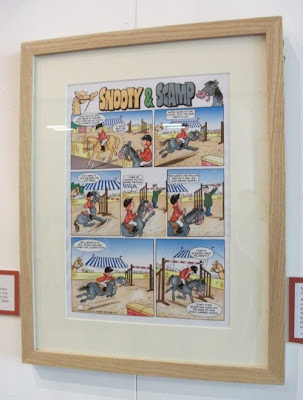 The afternoon then continued with a talk from Dez Skinn. Writer, editor, manager, publisher, Dez has had such a varied career that the choice of what he was going to talk about had prompted some discussion between attendees earlier in the day. His decision to tell us the history of fan favourite magazine House Of Hammer was a popular choice with his animated and amusing talk covering artists as diverse as Brian Lewis, Dave Gibbons, Joe Colquhoun, Paul Neary and John Bolton as well as the early concepts for the magazine that we all refer to as HoH but which Dez had originally planned to call Chiller. Dez's recollections on HoH and his other work can also be read on his new website, dezskinn.com. 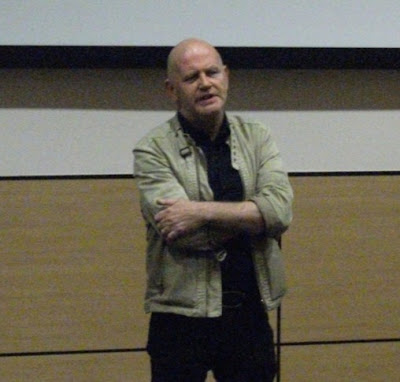 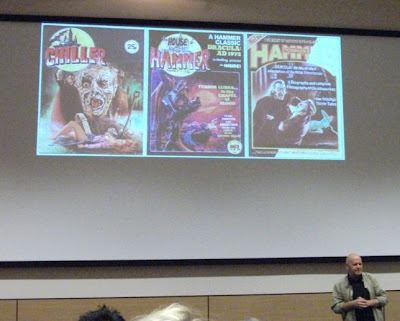 The final talk of the day was from writer and editor Pat Mills. With a career spanning DC Thomson as well as IPC titles such as Battle, Action and 2000AD, Pat chose to focus on his French bande dessinee series Requiem: Chevalier Vampire. This series with Giger-esque painted art by Olivier Ledroit has reached nine albums in France along with four albums of the spin-off series Claudia: Chevalier Vampire with art by Franck Tacito. The first two Requiem albums have just been released in English by Panini as Requiem: Vampire Knight and Pat took the audience through the creation of the albums and his relationship with its foreign artist. He also emphasised the point that British creators should not just be looking to America to get their work published but to France as well. In addition to allowing creators to retain the rights to their work, French publishers deal with a considerably greater range of titles and styles as well as a much greater volume of published copies. He pointed out that sales in the French language of the first album of Requiem alone were in the region of 100,000 which, while an order of magnitude less than say a Jean Van Hamme title, is easily an order of magnitude more than any UK graphic novel print run. Pat's interesting and thoughtful talk left more than one creator in the audience with the realisation that they should be looking across the Channel as well as the Atlantic with their work. 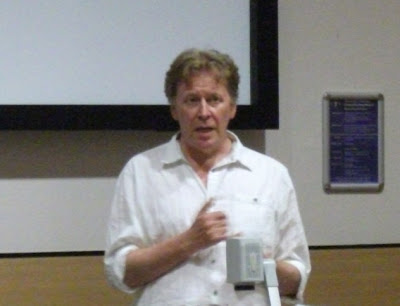 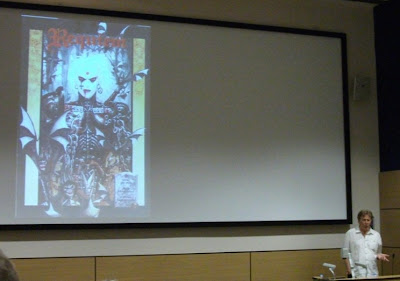 The day closed with a popular signing session in the reception area from Pat, Dez and Nana. One of the strengths of Dundee is the friendly atmosphere that exists outside the main lecture theatre with sales tables, exhibitions and refreshments all in the same area and the willingness of the guests to stand and chat to the attendees as well as to sign items outside of the slightly more formal signing sessions. Indeed where else could you talk to the editor of Warlord having just spoken to the editor of Battle or, as below, see the current Tharg's newest artdroid, Graeme Neil Reid, share a joke with the original Tharg, Pat Mills. 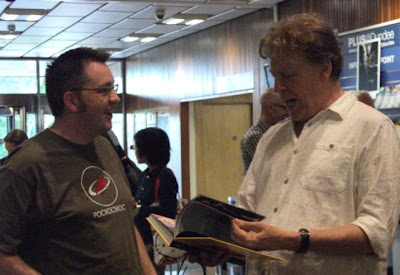 Fans of older British comics who despair at the dearth of titles on newsagents shelves compared to what there used to be for readers any older than junior primary, or who find the obsession that much of British comics fandom has with imported American superhero product strange, especially given its minuscule UK sales, have long found that mainstream UK comics conventions do not cater for them. These fans are as interested in what has gone before as in what they can get now and they have often bemoaned the fact that there are no "old comics" conventions. This year's Dundee Comics Day was as close to an "old comics" convention that I have come across, yet with a selection of creators with such impressively diverse careers that any mainstream comics convention would have been proud to have had them on their guest list.

The Dundee Comics Day has been the highlight of my comics year so far and I look forward in anticipation to what Chris Murray and his team have in store for next year.

This was my first time at this event and I have to say I really enjoyed it. Well organised but with an enjoyably informal atmosphere, and gummy sweets to boot.

I caught the last four talks, all with something different to offer but all very interesting and entertaining. Pat Mills capped things off brilliantly and was great bloke at the signing table too.

Kudos to the Chris and the organisers, see ya next year!