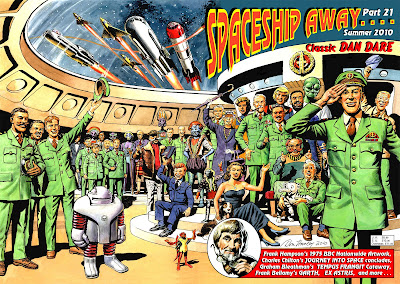 The new issue of Spaceship Away, the science fiction comics magazine inspired by and featuring the original Dan Dare, includes some stunning exclusives sure to appeal to fans of the original version of the Eagle space hero created by Frank Hampson.

Wrapped in a glorious new Dan Dare cover featuring ever major character from the strip from veteran artist Don Harley (click on the image above or here for a larger version), the issue also includes a glorious tribute to Keith Watson's work on Dare by Chris Weston, as part of a retrospective of the artist's contribution to the legend.

Garth: The Bubble Man - superbly coloured by John Ridgway - continues and, while there are two Dan Dare strips to enjoy this issue, proves the highlight of this issue's strip content for me, along with a cutaway of the Tempus Frangit vessel by Graham Bleathman.

In something of a coup for the magazine, this issue carries coverage of a little known news piece about the making of Dan Dare made by the BBC in the 1950s, complete with photographs of the event, and also features some incredibly rare Dan Dare art by Frank Hampson created for the BBC Nationwide magazine show in 1975.

• To order the issue online visit: spaceshipaway.org.uk
Posted by John Freeman at 10:25 am