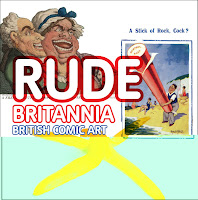 The lucky winners of our Rude Britannia book competition - marking the launch of the Rude Britannia Exhibition at Tate Britain in London - were Chris Williams from Liverpool; Paul B. Rainey, from Milton Keynes; and David Humphreys from Crawley.

Congratulations to the winners and commiserations to our many entrants, all of whom correctly nited that Steve Bell's If appears in The Guardian.

Rude Britannia: British Comic Art by Martin Myrone, Tim Batchelor and Cedar Lewisohn can be purchased from the Tate Britain shop for the exhibition price of £17.99 until 5th September 2010.

This 160 page, entertaining and irreverent history - featuring 100 colour illustrations - aims to present a wide-screen vision of comic art, from the eighteenth century to the present day, it features works by classic cartoonists and caricaturists, from Gillray, Rowlandson and Cruikshank, to Steve Bell, Robert Crumb, David Low and Ronald Searle. Beginning with the origins of the caricature, the book encompasses cartoons, comic books, film, photography, audio, new media and contemporary art. It traces the development of different genres and techniques, and deals with the development of successive media, from the engraving through to the newspaper and the online blog.

Through extensive illustrations of classic and little-known facets of comic art, the book succeeds in telling an alternative history of Britain. Leading critics are joined by well-known comedians, cartoonists and historians, making this a very contemporary take on what is still a rich and vibrant seam in the public life of the nation.

• More about the book here on the Tate Britain web site

We love a bit of slap & tickle! did you hear its coming to the festivals this Summer?