In Review: Classics from the Comics 171 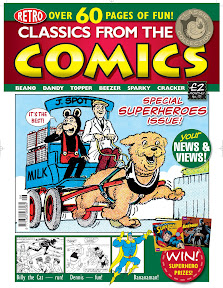 ... and it really is a classic of a comic, with a huge variety of strips from several decades - including some rarely seen examples of picture and text stories from the huge DC Thomson comics archive.

The trumpeted 'superhero' theme - which includes a competition to win Batman and Superman audio discs - doesn't extend to every strip featured in this issue of Classics from the Comics, and in the case of 'Jack Flash, The Flying Boy', published in The Beano in 1949, even editor Garry Fraser admits the superhero description is slightly nebulous. But that said the selection is again full of gems, with an increased number of adventure strips, including 'Billy the Cat' and the 'The Danger Man' from 1959 and a 1944 episode of 'Mr X'.

The inclusion of 'Mr X' from the second world war years indicates that superhero-styled characters, perhaps inspired by US comics such as Superman, were clearly quick to percolate into British comics, perhaps sooner than some fans realize.

There's good news, too, for fans of DC Thomson material who wanted to see creator credits in this 'retro' title - Gary responded to our suggestion in our last review and has begun including some artist details.

Alongside the superhero section strips such as a 'General Jumbo' story from Buddy and 'The Space Kids', from Beezer sit alongside nicely with a huge range of humour stories, including the always enjoyable 'Sparky People' (a personal favourite as I grew up), 'Minnie the Minx', 'Dennis the Menace', 'Baby Crockett', 'Curly's Commandos' and 'Corporal Clott'. And who couldn't enjoy some of the carefully selected feature pages, such as 'My Home Town: Nuneaton'? (whatever happened to pop combo Pinkerton's Colours who hailed from there, we wondered?*)

Classics from the Comics increasingly seems to be adopting a format combining both adventure and humour strips long popular in British comics but dropped by modern publishers in favour of more focused titles that favour adventure or humour, but rarely both. It's simply a delight - a reprint package that works, in spades, and deserving of your measly £2 to try it out.

• More about Pinkerton's Colours on Wikipedia, in case you were wondering, too!