I've known Russell Willis since the 1980s, first encountering him at the Fast Fiction stall run by Paul Gravett and Peter Stanbury at the now-legendary Westminster Comic Marts when he was publishing INFINITY, a zine that included many interviews with leading comic creators back then such as David Lloyd and others.

He has created products for TIME, the British government, Oxford University Press, and many others.


Russell’s audiobooks, podcasts, and iOS apps have all reached the Number One spot in Apple’s iTunes charts in Japan.

He is the publisher at Panel Nine (which has previously sponsored downthetubes), who have just launched SEQUENTIAL, a new digital store for a range of graphic novels.
We'd like to thank him for taking time out of a busy schedule to answer our questions...

downthetubes: Tell us what SEQUENTIAL is and what you hope to achieve?

Russell Willis: SEQUENTIAL is a digital graphic novel storefront app for that iPad, that is primarily designed for people who would read Persepolis or From Hell or something by Eddie Campbell or Alison Bechdel, but would never think of going to a typical geeky comic shop. It's a place to put together all the quality material that's out there and provide an environment where a mainstream reader can feel comfortable and not have a virtual She-Hulk scaring them off at the door. This time, we want to be on the main street of culture with our underwear worn *under* our trousers.

SEQUENTIAL has just launched in the UK and Ireland, and will launch in the US and the rest of the world at the end of June. It's free to download with the ability to purchase graphic novels from within the app. 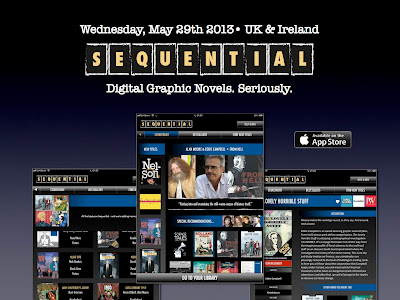 downthetubes: How did the project come about?
Russell: As you know, I have been fascinated by sequential art since my teens when I was publishing INFINITY. About 18 months ago, I found myself running a software development and publishing company and realised that I had the ability to do something exceptional in the area of digital graphic novels.
Having always talked about how graphic novels should be marketed and presented I had the opportunity to put my time and money where my mouth was.
Right time, right place, it just seemed the right thing to do.

downthetubes: What are the initial titles being offered through SEQUENTIAL?
Russell: We have 21 graphic novels, coming from Blank Slate, Knockabout and Myriad Editions. We've got From Hell by Alan Moore and Eddie Campbell, Bolland Strips by Brian Bolland, Lady Chatterly's Lover by Hunt Emerson, Science Tales by Darryl Cunningham, Hugo Tate by Nick Abadzis, Kickback by David Lloyd… it's a great list and we'll be adding lots of new titles every week.
We've also got a new "Sequential Mode" reader that is a bit like what Alex di Campi and Mark Waid have done with digital comics but with a few tweaks. There's a story drawn by Terry Wiley that can be downloaded for free from the app (which is also free to download).

downthetubes: How do you see the project developing over the next year?
Russell: The addition of more graphic novels, publishers like Self-Made Hero, Jonathan Cape, Walker Books, Abram Comic Arts coming on board, we'll be creating "Expanded Versions" of many titles, by adding audio commentaries by the creators along with interviews, production sketches, etc. and we'll be marketing graphic novels as a mainstream choice of entertainment, untainted by superheroes. 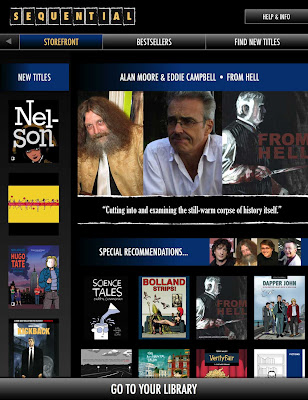 downthetubes: How will SEQUENTIAL impact on your other publications so far - will they merge with this new platform?
Russell: Yes, the four existing Panel Nine titles are on SEQUENTIAL.

downthetubes: You're busy developing a comics platform based on British and Western comics but Panel Nine is based in Japan... is there interest in the comics SEQUENTIAL will carry there?
Russell: The market for western graphic novels in Japan is quite small, but we are talking with Japanese publishers about doing some things.

downthetubes: What do you think are the main advantages for creators and publishers publishing their work digitally?
Russell: Availability -- in theory anyone with an iPad can purchase one of our titles, and creators can more effectively promote their own titles by directing their fan base straight to SEQUENTIAL to purchase immediately.

downthetubes: Growing a digital comics audience isn't easy, despite the hype for digital publishing. Are we in an age of 10 per cent perspiration, 90 per cent promotion to compete with all the other offerings out there - legally free comics, other media and the pirates?
Russell: The ubiquitous availability is there as mentioned above, but just because you have a phone number doesn't mean everyone calls you. The promotional aspect of digital comics is, as you suggest, extremely important, and is a demanding ongoing exercise. With printed books, once they are in the shops then the shops are out selling them for the publisher every day. With digital the publisher (or platform owner, in our case) has to be doing that -- through advertising, social media, events, promotions etc.

downthetubes: While generating revenues on the iPad and related Apple platforms seems a given, purchases on other platforms (Android, for example) seem slow in comparison. Do you think there's still a resistance to the concept that digital creations have intrinsic value?
Russell: The stats at the end of last year indicated that for every four iOS apps sold only one Android app was sold. And this is despite Android having a larger installed base. The demographics of Android device owners and iOS device owners has been quite different, and simply put, Android owners tend to buy less stuff, are younger, and more inclined to settle for free stuff.

With regard to digital creations having less intrinsic value, I think that part of the reason for that is that so much digital is of less intrinsic value. Publishers shovel stuff into ePubs or put out apps that work incredibly badly. One point of pride that we have about our apps is that they are often described as "deluxe" "coffee table" apps, which is exactly what we intended. Getting them like that involved sweating hundreds if not thousands of details.
I think when people use our apps, they do perceive the value. Our problem is that all the crap that gets put out means that people are very wary.
SEQUENTIAL, being a container app, should partly solve that problem as they can download it for free, try out a free app and get a real sense of the value that we are providing before they purchase.

downthetubes: What one piece of advice do you regularly give new comic creators?
Russell: I don't think I've ever had the opportunity to give a new comic creator any advice. But if I am in that position, I would suggest that people ensure that they have a strong social media following. If there are two artists of equal merit and one has 10,000 Twitter followers, then choosing which artist to publish just got a lot easier. (And that advice is advice I need to take too!)
• Download SEQUENTIAL for free from the iTunes here

• Read an interview with Russell about SEQUENTIAL by Paul Gravett