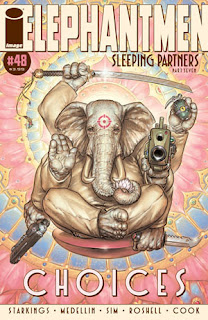 With the brilliant 2D Festival on this weekend in Northern Ireland, here's a quick plug for the latest issue of Richard Starkings Elephantmen.


Issue 48, with art from Axel Medellin and a cover by the ever brilliant Boo Cookoffers the seventh part of 'Sleeping Partners' storyline, in which you'll find there's a price on Gabbatha's head and the Silencer means to collect...

The issue also features new pages of Charley Loves Robots by JG & Gabo in EM#48 -- here's the previous installment to catch you up!

Now a major publisher in his own right, Richard is just one of many former Marvel UK creatives  at 2D this coming weekend. The line up also includes Simon Furman, Mike Collins, Doug Braithwaite, Gary Erskine and David Hine, alongside other great comics talet such as Cam Kennedy, Garry Leach, PJ Holden and many, many more.

downthetubes Jeremy Briggs will also be at the event. Smile for his camera!

• Elephantmen #48  is available in all good comic shops and online. Read a six-page preview at CBR 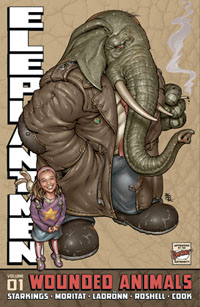