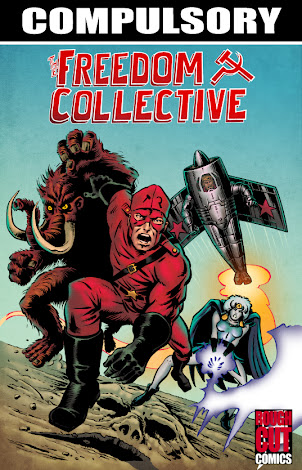 Rough Cut Comics will release its long-awaited new volume of Freedom Collective stories through the June edition of Diamond Previews.

The original one-shot title – which re-imagined the type of comic-books that Stan Lee and Jack Kirby, could have created IF they had been born and worked in the 1960s Soviet Union – became a “sleeper hit” in the independent comic-book scene and has attracted fans such as Grant Morrison and Alex Ross.

It also received the backing of The Jack Kirby Collector and was one of new distributor UKonDisplay’s biggest selling titles at their launch earlier this year.

Creators Igor Sloano and Barr are again providing the scripts which truly capture the jingoistic style of the House of Ideas back in the sixties.

Publisher Ed Murphy said: “This is a tribute to a long-lost style of comic-book story-telling. It’s one which conveyed the action dynamics in five-to-nine frame panel pages; with cut-to-the-chase dialogue sometimes conveyed in the now-defunct style of ‘thought bubbles’.

“I’m so glad the original one-shot found its audience and continues to grow in popularity. I think this is a book for genuine comic-book fans and particularly of the Lee/Kirby style which should never be forgotten.”

Rough Cut Comics will attend the Glasgow Comic Con on 13-14th July at the city’s CCA, where they will preview the new Freedom Collective book. Artists Dave Alexander and Dom Regan are also expected to be in the attendance.

• You can find out more about Rough Cut Comics at www.roughcut-comics.com on their Facebook page: https://www.facebook.com/roughcutcomicsuk or their twitter feed @roughcutcomics.

• THE COMPULSORY FREEDOM COLLECTIVE is solicited in the June edition of Previews for shipping August 2013. The product code is JUN131260 and is featured in Page 333 of the edition.