In Review: Largo Winch - 3 Eyes Of The Guardians Of The Tao/The Way And The Virtue 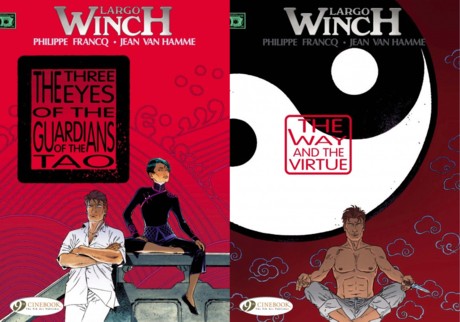 Largo Winch, writer Jean Van Hamme and artist Philippe Francq's James Bond-like billionaire businessman adventurer, returns in his latest two part adventure in Cinebook's The Three Eyes Of The Guardians Of The Tao and The Way And The Virtue.

An aircraft manufacturing deal between one of the W Corporation companies and a Chinese business requires Largo to travel to Hong Kong to sign the contract personally. With Hong Kong now part of China this is a plot by the Chinese to get Largo back into the country to arrest him because of his past. Previously Largo had been imprisoned in Chinese occupied Tibet, a prison that he escaped from and the Chinese authorities want him back in it. 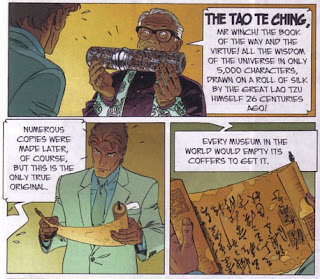 Largo escaped from that prison with the help of a Chinese triad arms smuggler, Tan Ming T'Sien, whose triad later helped rescue Largo's good friend Simon Ovronnaz from a Burma prison. But that help came with a price and the triad are now calling in that favour as they want an ancient religious document, the Tao Te Ching, the book of the Way and the Virtue, that is owned by the man who runs the Chinese aircraft business that Largo is dealing with.

Largo must steal from the man he is doing business with while avoiding the authorities...

This pair of titles are effectively the sequel to the much earlier book The Hour Of The Tiger but you really do not need to have read that book to understand what is going on here as Jean Van Hamme gives the reader all the information that they need in these new titles to appreciate the back story of this meticulously plotted tale of business, triads and friendship. Indeed the main story is so heavy that it is good that Van Hamme has introduced a new sidekick for Largo in the petite and pretty form of his new personal pilot Silky, as seen on the cover of the first book. As the main plot starts to get so serious, the sparring of Simon and Silky over Silky having much better luck with women than Simon gives the first book in particular some lighter breathing spaces. 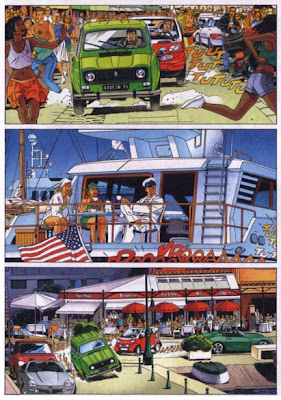 Les Trois Yeux Des Gardiens Du Tao was originally published in France in March 2007 while La Voie Et La Vertu was published in November 2008 just before the release of the big budget live action Largo Winch film with Sisley Tomer and Kristin Scott Tomas. It is interesting to note that the film transposed the W Corporation headquarters from New York to Hong Kong, a fact that Van Hamme would presumably have known, and where he set so much of the spectacle of these books.

Philippe Francq's artwork plays well to that spectacle with  various Bond film-style set pieces such as a car chase between an ancient Renault 4 and a new Smart ForTwo Cabrio, or an aerial sequence with an old and unarmed Beaver float-plane being chased between the Hong Kong skyscrapers by a new and armed MD-520N Notar helicopter. It all comes together to make this story feel like the big budget action film it deserves to be.

It is easy to get used to how good Jean Van Hamme's various series can be but Largo Winch - The Three Eyes Of The Guardians Of The Tao and The Way And The Virtue are perhaps the most impressive Largo books yet. For those wanting to sample this series I used to recommend the pairing of See Venice... ...And Die! but now I would say that these are the best pair of titles in the series to date, and well worth picking up.

• There are more details about all the Largo Winch books, as well as the two live action films, at the official Largo Winch website (in French).
Posted by Jeremy Briggs at 9:00 am