(with thanks to Norman Boyd and Kevin Carpenter): It was a surprize to me too - but British Comics do turn up in the strangest of places - but none appear to be treated with more reverence lately than by Germany's Library of the University of Oldenburg, which has around 5000 old British comics, mainly Amalgamated Press products of the era 1890 to 1930, but also including odd items such as The Man in the Moon (1848) and Ally Sloper: A Moral Lesson (1873). 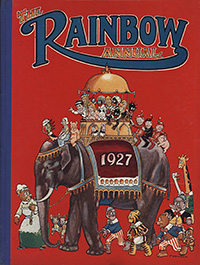 Making full use of just some of these assets, the Library has created Wonderfully Vulgar - a superb online exhibition to show off some of the archive, documenting the early history of British comics up until the 1930s. The online display includes plenty of Victorian comics, comic covers and strips published during World War One - and a wonderful selection of material from the post-war years including information on such longtime favourites as Tiger Tim and Comic Cuts.

• View the web exhibition at www.wonderfullyvulgar.de

• Robert J. Kirkpatrick's recent book From the Penny Dreadful to the the Ha'Penny Dreadfuller (2013) is a truly magisterial study of periodicals for boys
Posted by John Freeman at 7:25 am